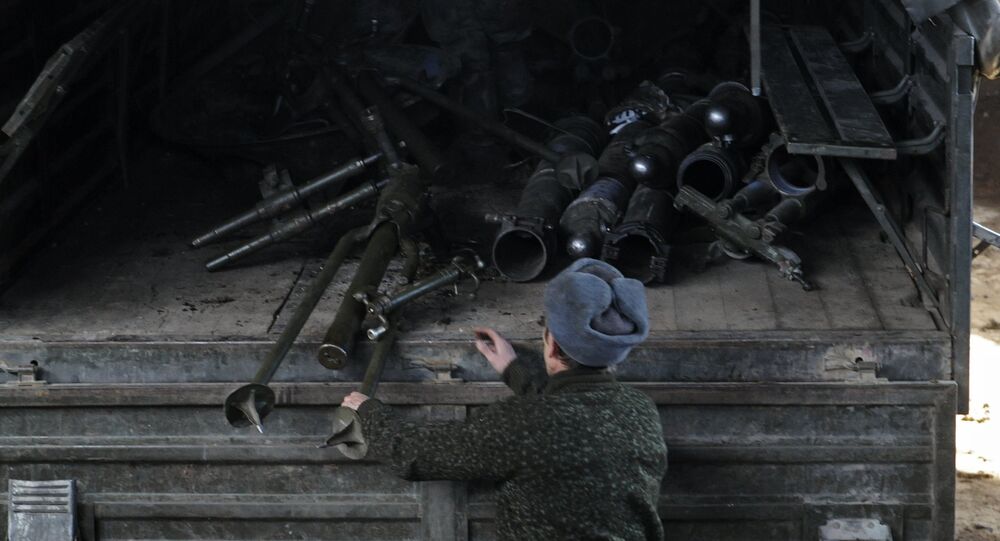 According to Donetsk defense minister, the people's republic is planning to start withdrawing artillery of under 100-mm caliber on October 28.

“The withdrawal will happen on 28 [of October]. It is artillery of up to 100-mm [caliber]. The third step would be the withdrawal of mortars of less than 120 mm,” Basurin said.

The statement comes after the Ukrainian Armed Forces General Staff said Thursday that they were ready to begin withdrawal of up to 100-mm-caliber weaponry on October 28.

© REUTERS / Stringer
Kiev Withdraws Weapons in Donetsk Region, to Complete Pullback in November
The Ukrainian government and the opposition militia in the southeast agreed to withdraw heavy artillery with a caliber of over 100mm from the line of contact in February 2015, moving in September to extend this withdrawal to weapons with a caliber under 100mm.

The agreement was prepared in August by a security subgroup of the Trilateral Contact Group on Ukrainian reconciliation, including representatives from Ukraine, Russia and the Organization for Security and Co-operation in Europe.

Earlier in October, Ukrainian military spokesman Leonid Matyukhin said that Kiev has pulled back weaponry with a caliber of over 100mm from the line of contact in two regions of the DPR.