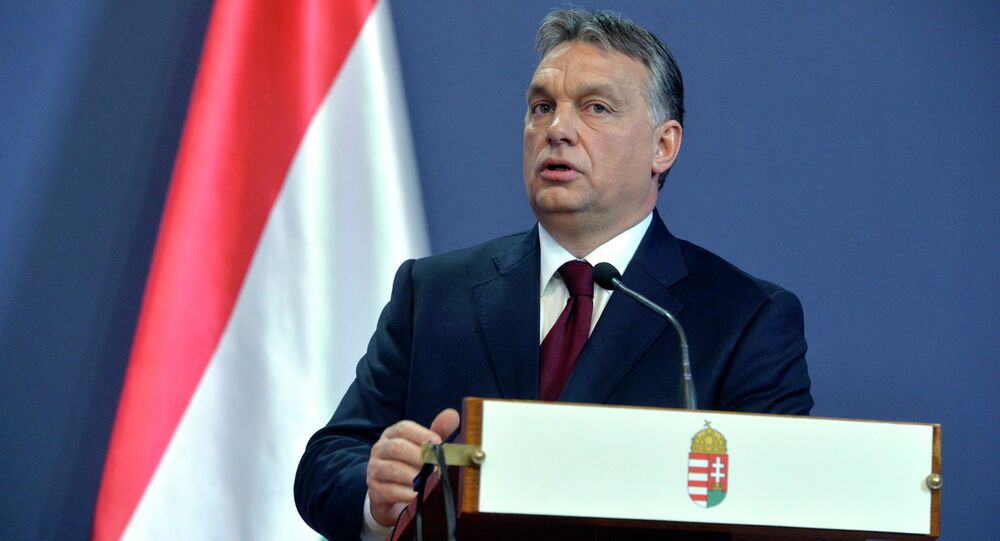 The prime minister, known for his outspoken and often controversial commentary on the migrant crisis, suggested that if large numbers of migrants come to Europe and "retain their own communities based on different values," co-existence will mean forcing Europeans to accept these values as well, a summary of the interview published on the president's official website explained.

Saying that the rise of such "parallel societies" may threaten many of the "pillars of the European way of life" – the rights and freedoms that Europeans take for granted, Orban suggested that the only way to prevent this from occurring is not to let migrants in, "not to allow them to create parallel societies."

© REUTERS / Francois Lenoir
'Not a Basic Right for All': Hungarian PM Defends Anti-Immigration Approach
The prime minister, well known for his defense of European civilization and its Christian roots, reiterated in his interview that the continent's future prosperity and greatness will depend on nations taking their "traditions and Christian roots seriously." Moreover, the leader lamented what he said was a grave mistake: "that an affirmation of Europe's Christian roots [was] not laid down in the European Union's fundamental documents."

Commenting on the refugee crisis plaguing many European nations, including Hungary, which recently closed its borders to neighboring states, Orban suggested that immigrants coming to Europe must make their intentions clear: "If someone wants to live together with us, they must first reveal who they actually are and what their intentions are, and all these issues must be clarified."

The prime minister stressed that this is something which is not happening at the moment. "We do not know who these people are, what their plans are, how they wish to maintain their own ideals, and we do not know if they will respect our culture and laws. This is an unregulated, uncontrolled process, the definition of which is invasion."

Finally, the PM stressed that in addition to the problem of 'parallel societies', the refugee crisis has brought out other problems which seem inherent to the European project, namely –that people have not been able to vote on what is happening. Orban also noted that the refugee crisis has led to a crisis of the Schengen zone, suggesting that in order for Europeans to be able to move about in the continent freely, Europe must do more to protect its external borders.

'Not a Basic Right for All': Hungarian PM Defends Anti-Immigration Approach

EU Has No Mandate From European People to Host Numerous Refugees