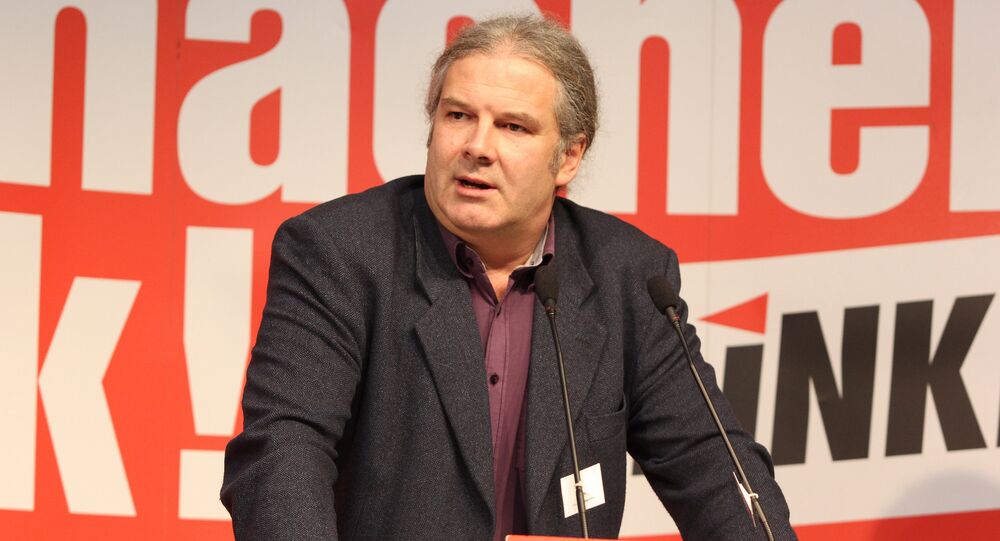 © Sputnik / Nikolay Lazarenko
Bill on East Ukraine Elections to Be Introduced to Parliament by Year-End
MOSCOW(Sputnik), Daria Chernyshova — A German lawmaker from Die Linke (The Left) party and a delegate to the Parliamentary Assembly of the Council of Europe Andrej Hunko told Sputnik Friday that he had to cancel his plans to participate in the mission to monitor the Ukrainian local elections because of security threats to his life.

Hunko explained that in the email exchange betwhis een the head of the Ukraine delegation to PACE Volodymyr Ariev and the Assembly Secretariat on the upcoming visit, Ariev stated that the parliamentarian could become a target of an alleged attack by, as the West calls it, “pro-Russian forces in Ukraine" to discredit Kiev afterward.

"I cancelled my participation in the election observation mission of the CoE [Council of Europe] Ukraine elections due to threats and security concerns," Andrej Hunko said, adding that he could be attacked by anyone in Ukraine but not pro-Russian forces.

© Sputnik / Mikhail Voskresenskiy
European Parliament to Monitor Local Elections in Ukraine
Other members of the 11-person delegation, according to Ariev, apparently are not in any danger, only the German nominee from the Left political group.

The German lawmaker visited eastern Ukraine earlier this year to deliver humanitarian aid to the cities of Luhansk and Donetsk. He has participated in every election observation mission organized by the Council of Europe in Ukraine since the last elections in 2012.

The head of the Ukraine delegation to PACE, Ariev, has previously objected to Hunko's inclusion in the election observation mission to Ukraine, labeling his previous visit to the southeastern Ukrainian regions as "a provocative act."