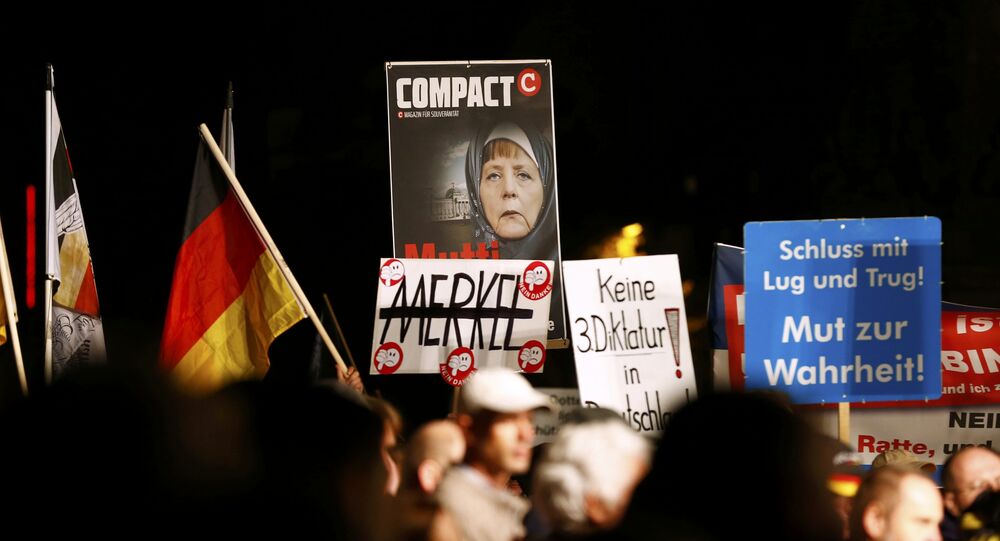 More than 200 German mayors complain in open letter to Chancellor Angela Merkel that it is impossible to even place refugees in tents and building containers.

© AFP 2020 / CHRISTOF STACHE
Germany to Face Budget Deficit in 2016 Amid Refugee Costs
BERLIN (Sputnik) – More than 200 German mayors from North Rhine-Westphalia have complained in a letter to Chancellor Angela Merkel of the difficulties they have encountered in hosting large numbers of refugees, local media reported Thursday.

"The large influx of refugees into our cities and communes led to the fact that all possibilities for housing them have been exhausted. Now it is impossible to even place them in tents and building containers. The staff of the communes is largely involved in servicing the accommodation centers. This leads to the fact that all other tasks of communes either cannot be fulfilled at all, or in a very limited fashion," an excerpt from the letter, cited by the Rheinische Post newspaper, reads.

© REUTERS / Michael Dalder
German Business Managers Unhappy With Merkel Refugee Support Policy - Poll
Some 710,000 people, fleeing war and poverty in Africa and the Middle East, crossed the European Union’s external borders in the first nine months of this year, according to the bloc’s border agency Frontex.

Germany, the main destination for many asylum seekers, has been projected to take in up to 1.5 million refugees this year alone.

On Tuesday, a poll by Handelsblatt Business Monitor revealed that Merkel was losing the support of the local business community due to Berlin's refugee policies.

Germany to Face Budget Deficit in 2016 Amid Refugee Costs