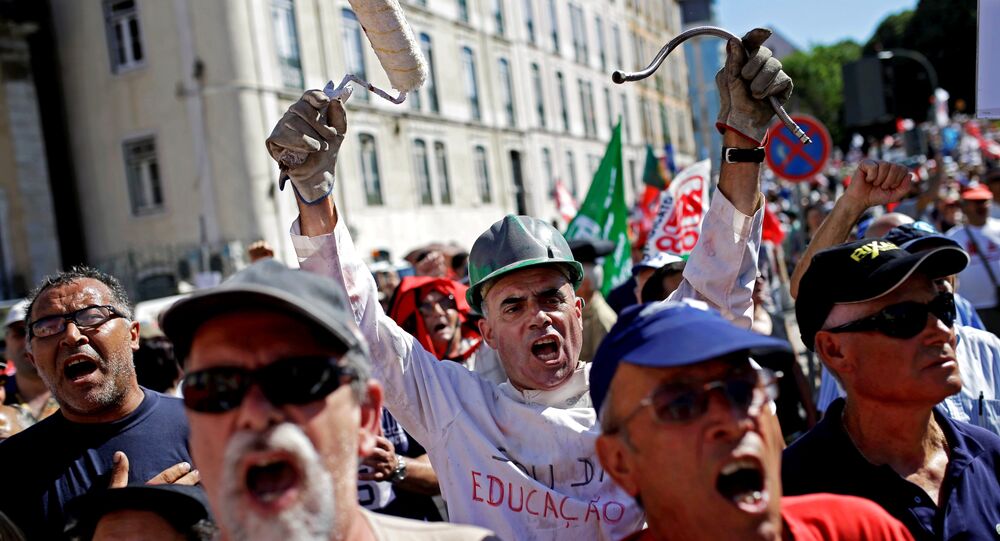 The EU is facing its second anti-austerity revolt in less than a year with a coalition of Portuguese left-wing parties announcing that they have secured enough seats to form government, leading to fears that it may trigger a domino effect of further anti-Brussels sentiment across the bloc.

Antonia Costa, the leader of Portugal's Socialist coalition, announced that he had secured the support of two smaller leftist parties — the Communist party and Left Bloc, giving him the power to form government with majority support.

While the Leftist alliance are still ironing out the formalities of their agreement, the creation of a government under Socialist leader Costa would herald a dramatic shift in policy in Portugal, adding to the anti-EU sentiment across Europe.

Socialists to 'Turn the Page' on Austerity

During the run-up to the October 4 election, Costa campaigned to "turn the page on austerity" by reversing pay cuts to public workers, rolling back labor reforms and pledging to review the privatization of public assets like transport infrastructure and water works. On top of these proposals, Costa has also promised to spend more on healthcare and education.

In more radical plans, the Portugal's Communists and Left Bloc have both spoken about returning to the country's former currency, the escudo, while Communist leader Jeronimo de Sousa believes the EU Fiscal Compact, which legally enforces countries to avoid rising debt, should be scrapped.

These proposals appear to be in direct opposition to the plans enforced on Portugal by EU officials, which require the country to adhere to strict public spending limits in order to reduce debt.

The popularity of the anti-austerity parties represents a defiant shift away from the hugely unpopular austerity policies implemented by the former center-right government.

Under the previous government, Portugal completed an US$88 billion (€78bn) international bailout package that forced the country to implement harsh Troika-enforced austerity measures.

While Brussels and Portugal's conservative figures argued that the reforms were essential to rescue the country from its deep debt, others argued that such impacts took a heavy toll on the country's poorest people and have left the country in a worse state than before.

The dramatic public shift away from EU economic plans in Portugal is also seen to be part of a wider EU-wide backlash against Brussels, with opponents highly critical of the damaging effects EU austerity bailouts have.

The first revolt was seen earlier this year when the left-wing Syriza party took control in Greece.

Under the leadership of Alexis Tsipras, Syriza went toe-to-toe with other Eurozone officials, before eventually succumbing to demands for more austerity as part of a third bailout.

However, officials in Brussels feared that the Greek rebellion could help trigger similar anti-austerity movements across the bloc, with the rise of leftists in Portugal seemingly vindicating concerns.

Attention will now turn to other countries bound by strict EU fiscal rules such as Spain, Italy and France, which all contain significant anti-EU populist support.

© Photo : Pixabay
New Politics of Europe: Rise of Right and Left Against Traditional Center
With Spanish elections to be held in December and the French to go to the polls in 2017, there are fears that the anti-austerity, anti-EU sentiment could trigger a domino effect across Europe. This would place extreme pressure on officials in Brussels to change the nature of the bloc's economic policy.

If the proposals of anti-austerity governments are handled in the same manner the Greek demands were earlier this year, many commentators have speculated that it could spell the end of the single-currency as we know it, and potentially the bloc itself.