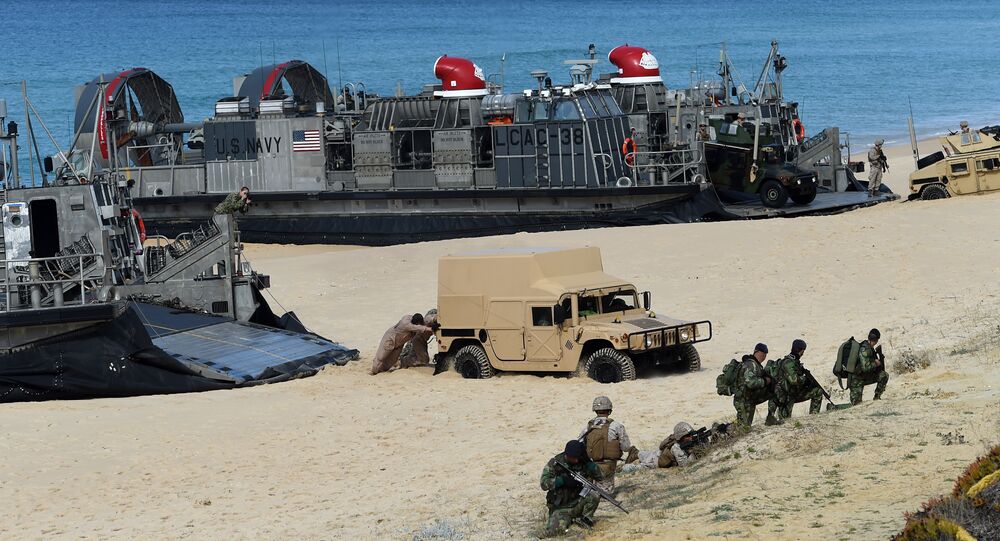 While Russian Warplanes Bomb Terrorists, NATO Gets Stuck on a Sandy Beach

Hovercraft and Humvees taking part in NATO's Trident Juncture training made hard work of the Portuguese coast after being released from the USS Arlington, and eventually got stuck just meters from the shore.

© CC0 / US Army Europe Images / Raising of the NATO flag
A Step Too Far: US Needs to Weigh the Consequences of Permanent NATO Bases in Europe
US army jeeps released from navy hovercrafts on Tuesday were unable to get the better of Portuguese sand, which caused them to start sinking as soon as they set their wheels on the coast.

Portugal's Observador newspaper was one of several media outlets invited by NATO to observe the Trident Juncture 15 training exercise on a beach in the the Portuguese city of Grandola, the planning for which began two years ago.

"NATO decided to have a celebration and invited journalists," reported Observador.

Trident Juncture has been described as the largest NATO-led exercise in 20 years, completing training in Italy, Spain, and Portugal. Its Portuguese exercise was described as taking place "on a scale never seen before," explained the newspaper.

Portuguese television footage of the incident.

However, instead of a triumph of military prowess, the watching journalists looked on as first, two hovercrafts were released from the USS Arlington amphibious transport dock, but were unable to make it to shore; after another attempt, the hovercraft finally set their cushions on the beach.

Then, an order was given to release two Humvee jeeps, which promptly got stuck in the sand. Orders from the US ambassador to Portugal Robert Sherman and vice-admiral of the Portuguese fleet Jose Domingos Pereira da Cunha for more troops to assist in getting the vehicles out of the sand were to no avail – the jeeps simply sank deeper into the beach.

The footage has proven a hit on social networking sites, and was shared more than 4,000 times on Facebook in one day.

© AP Photo / Steven Governo
NATO Trident Juncture Bigger Than Ordinary Military Exercises
Despite the visible obstacles to training, representatives of the US and Portuguese embassies, and a representative of the US marines at a mini press conference nevertheless sought to put a brave face on the situation, reports Observador, and called the exercise a success.

"The marines of both countries tried very hard. The training was a good opportunity to practice the skill of pulling out a stuck vehicle," said the NATO representatives.

One Way No More: NATO Rings Alarm Over Russia’s Might in Mediterranean