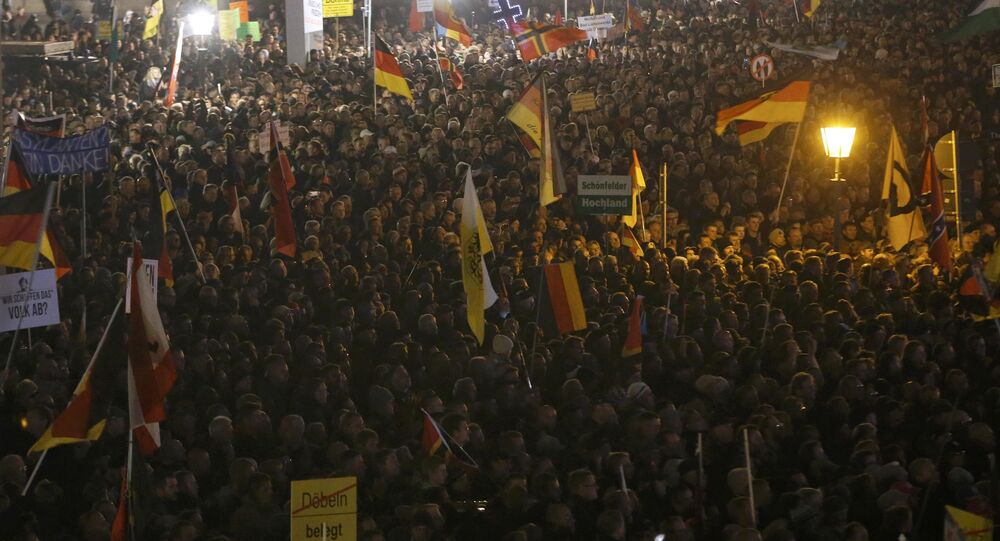 RT RUPTLY video news agency's cameraman was attacked by neo-Nazis during the broadcasting of an anti-Islamic movement PEGIDA march in Dresden. The man said he used to cover PEGIDA demonstrations in Dresden, but this has never happened to him before.

The TV worker, who asked us to omit his name for security concerns, spoke about the incident in an exclusive interview with Sputnik.

He said that there were no visible physical injuries, but his video equipment was damaged during the attack.

“I tried to take my camera back but they didn’t let me. There were like six or seven of them,” he explained.

© AP Photo / Jens Meyer
Ruptly Journalist Beaten During Mass Pegida Rally in Dresden
He also added that he was used to covering PEGIDA demonstrations in Dresden, but mentioned that such incidents have never happened to him before.

Replying to the question about the efficiency of local security forces, he said that they were quite helpful and well-organized.

“The problem for me was that I was on the Nazi side and the police had to respect that.  And they didn’t go too much inside,” the man explained.

PEGIDA, which stands for "Patriotic Europeans Against the Islamization of the West," is notorious for organizing mass demonstrations across Germany against the influx of refugees from Muslim countries. The largest protests usually take place in Dresden and gather tens of thousands of people from various German cities.