New documents reveal sharp differences of opinion between Swedish and British prosecutors over the prospect of arresting WikiLeaks founder Julian Assange, who is holed-up in the Ecuadorian embassy in London.

Assange took refuge in the Ecuadorian embassy in August 2012 when the South American country granted him political asylum. He was avoiding extradition to Sweden on allegations relating to sexual molestation and one count of unlawful coercion. Assange denies the accusations which were dropped in August 2015 under the statutes of limitation.

Assange was avoiding being extradited to Sweden as he feared onward extradition to the US, where he is wanted under the Espionage Act over WikiLeaks releasing the Bradley (now Chelsea) Manning material, disclosing nearly three-quarters of a million classified or unclassified but sensitive military and diplomatic documents.

Assange was arrested on a European Arrest Warrant (EAW) in December 2010 and his extradition ordered him to answer criminal allegations in Sweden. He was bailed to live under house arrest, pending an extradition hearing. However, he jumped bail and fled to the Ecuadorian embassy. He is subject to arrest under Section 7 of the Bail Act, for failing to surrender to custody on 29 June 2012 for removal to Sweden. 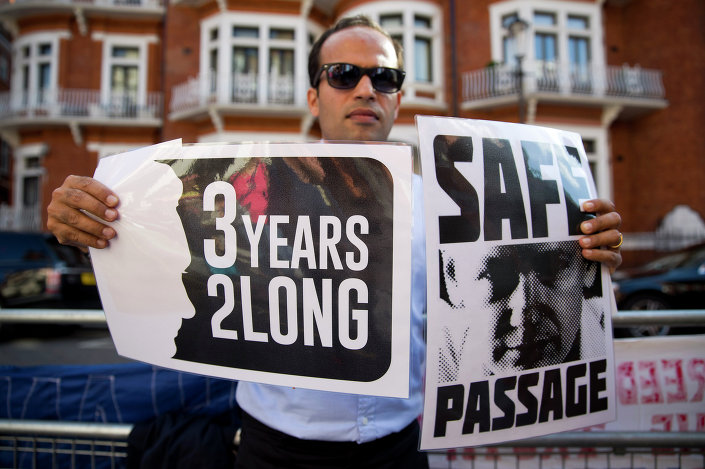 © AFP 2019 / Justin Tallis
A supporter of Wikileaks founder Julian Assange holds banners outside the Ecuadorian embassy in London as he marks three years since Assange claimed asylum in the embassy on June 19, 2015.

London's Metropolitan Police (MPS) announced on October 12 that it was removing uniformed officers from the steps of the embassy, after an operation lasting more than three years and costing over US$17 million.

It said in a statement: "Like all public services, MPS resources are finite. With so many different criminal, and other, threats to the city it protects, the current deployment of officers is no longer believed proportionate."

Out of the Question

However, it has now emerged that there have been differences of opinion between prosecutors in London and Stockholm over Assange. According to French newspaper l'Espresso, from the very beginning, the UK Crown Prosecution Service advised the Swedish prosecutors against the investigative strategy that could have led to a quick closure of the preliminary investigation: questioning Assange in London — as he has requested on many occasions — rather than extraditing him to Stockholm, as the Swedish prosecutors have always tried to do.

Documents obtained under Freedom of Information requests show in January 2011, soon after Julian Assange had been arrested in London, a lawyer at the Crown Prosecution Service, Paul Close, strongly advised the Swedish magistrates against questioning the WikiLeaks founder in London.

Close believed the appropriate strategy was to interview him "only on his surrender to Sweden and in accordance with Swedish law."

In a letter to the Swedish prosecutors, Close said:

"It is simply amazing how much work this case is generating. It sometimes seems like an industry. It is certainly non-stop. Please do not think that the case is being dealt with as just another extradition request."

However, the situation changed by 2015, when Swedish prosecutor Marianne Ny agreed that Assange could be questioned in London. However, the Swedish contacted the Ecuadorian authorities at the last minute before the proposed meeting at the Ecuadorian embassy in June and the questioning never took place.

"One prosecutor traveled to London together with a police-officer. When they were in London Marianne Ny, their boss, canceled the whole thing due to the fact that Sweden had not gotten the permission from Ecuador. Sweden applied way too late."

After the Swedish charges were dropped in August the Metropolitan Police in London had discussions with the UK interior and foreign ministries and declared it would remove the uniformed officers from the embassy, saying covert operations to keep tabs on Assange would continue.

© Photo :
Money spent by UK government on the siege against Julian Assange

However, it did not hide its frustration at the ongoing case. It said:

"Despite the efforts of many people, there is no imminent prospect of a diplomatic or legal resolution to this issue."

All of which points to the fact that the issue will remain embroiled in a legal and diplomatic deadlock.