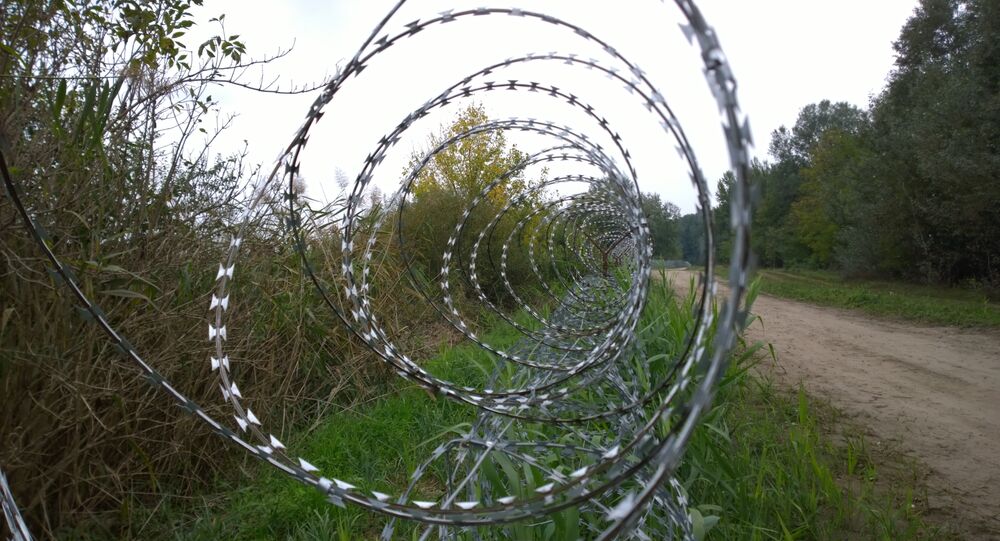 The small Hungarian village of Asotthalom on the Hungarian-Serbian border was caught off guard when thousands of migrants rushed into the country. Mayor Laszlo Toroczkai was the first who suggested erecting a fence to clamp down on the influx – and now the fence is in place, and Sputnik joined a police patrol to check if everything was OK.

Vasily Raksha — We were driving in a 2012 Toyota Hilux – quite a legendary car to a certain extent: this very car was featured in the mayor’s famous video message to human traffickers and illegal immigrants. After the government declined his request to chase away human traffickers in the jeep, the public took matters into their own hands by raising 5,334,000 forints (approximately 17,000 euros) for a new car – a powerful reinforcement to its police’s Lada Niva jeep.

Our ride to the border took just several minutes and we saw the mayor’s farm – the place where he alone encountered a group of 40 men from the Middle East at night. No wonder he was so eager to move forward with the construction of a border fence.

The unexpected necessity to maintain order prompted both the young and the old to fall into line.

Another jeep was approaching and the drivers greeted each other. We were driving past a camouflaged military filed shelter. Our guide stressed that it was strictly prohibited to take photos of the soldiers.

Luckily for the little town, the Hungarian Army is also patrolling the Hungarian-Serbian frontier: otherwise it would be impossible to efficiently control the designated 22–km border sector –just 30 minutes away from the Roszke-Horgos border-crossing point that gained notoriety for bitter clashes between refugees and police.

So what does the much talked-about border fence look like?

The first type is a double fence consisting of a 3.5-meter-high metal net and a lower combination of three levels of razor wire (and those razors are not that scary).

The second type lacks the 3.5-meter-high barrier. But this should be upgraded to the first type.

The border is equipped with heat cameras helping the law enforcement to detain illegal border-crossers at night.

After the government took a more serious approach to protecting its borders, refugees almost gave up attempts to penetrate in broad daylight. But patrolling the frontier takes place hour after hour.

“We catch them two or three times a night every time,” a patrol member revealed.

Migrants’ clothes were hanging down the wires. They lost them trying to cross the border quickly in fear of being caught by the police.

Some refugees simply undermine the fence with their hands, and we saw multiple tunnels and beaten paths through the bush on the Serbian side.

Urging a harder fence and doubled patrol, the sentinel recounted a night meeting with the migrants:

“I have a military background and I can say for sure, you look in their eyes and you see that they want to fight. They approach you in strict combat lines.”

This idea was echoed by Mayor Toroczkai, who said that 83 percent of the refugees are young males.

A severe test fell to the peaceful Hungarian village with its under-4,000 population. But its defenders are facing the music with their visors raised. They will not retreat and will not surrender.