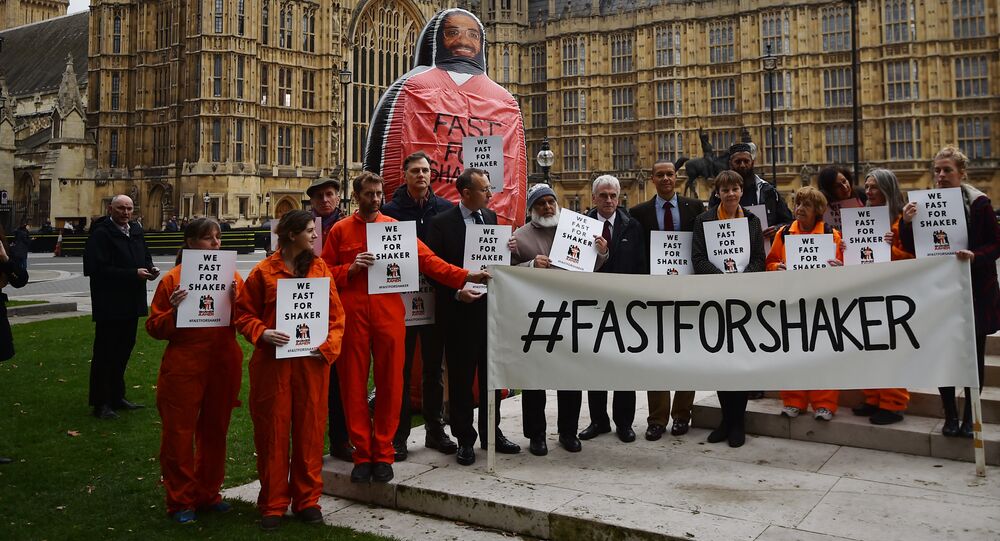 A number of UK activists, including some MPs and celebrities have pledged their support to a symbolic 24-hour hunger strike in solidarity with Shaker Aamer, the last UK prisoner held in Guantanamo Bay.

The 'Fast for Shaker' campaign was launched to demand the immediate release of the 48-year-old Saudi-born, British resident, who has been held by US forces in Guantanamo Bay prison for close to 14 years, despite never being charged with an offense or put on trial.

Thanks & appreciation to all our #FastForShaker supporters who came 2 our Press Launch Gd luck fasting @labourlewis pic.twitter.com/8zifO7GDTK

The hunger strike mirrors similar actions reportedly taken by Aamer himself, who has undertaken a hunger strike to protest against his ill treatment and 14-year detainment.

Today i #FastForShaker. After years of struggle, there's now light at the end of the Tunnel. Thank you to you all:) pic.twitter.com/00SIpxFKMb

The campaign's website says the aim of the demonstration is to "encourage Shaker to give up his hunger strike, in the knowledge that others have chosen to take up his protest."

While the 48-year-old is expected to be released on October 24, protesters say there is no guarantee this will happen and are keeping up the pressure on both the US and British governments to ensure he is finally removed from the prison.

UK Shadow Chancellor John McDonnell is among those pledging to take part in the hunger strike, along with fellow MPs Caroline Lucas and David Davis, and actors Mark Rylance and David Morrissey.

Shaker Aamer was volunteering for a charity in Afghanistan in 2001 when he was abducted and handed over to US officials.

Aamer has consistently denied that he is a terrorist or has been involved in any terrorism-related activities, with his legal team claiming that he was tortured during the US interrogation process.

He was cleared for a release to Saudi Arabia — where he is a citizen — in 2007 after six US government agencies agreed that he posed no threat to the US or its allies. He was then cleared again in 2009, but has been awaiting release from Guantanamo Bay ever since.

Despite the UK government saying that they want to see Aamer return to London to live with his family, critics have accused London of being complicit in his detainment.

The Independent newspaper revealed in 2012 that following a Freedom of Information (FoI) request, the British government had spent US$424,000 (£274,345) fighting Mr Aamer in court, and tried to prevent his lawyers from viewing evidence that may have proven his innocence.

"It is deeply suspicious that the UK won't say why their friends in the US refuse to transfer Shaker home to London. The US and UK intelligence services appear to be working together to ensure Shaker stays where he is or gets shipped off to Saudi Arabia. Shaker knows too much. National embarrassment isn't a reason to keep a man who has been cleared for release locked away in prison. Shaker must be returned to his family in London at once," Clive Stafford Smith, Shaker's lawyer said.