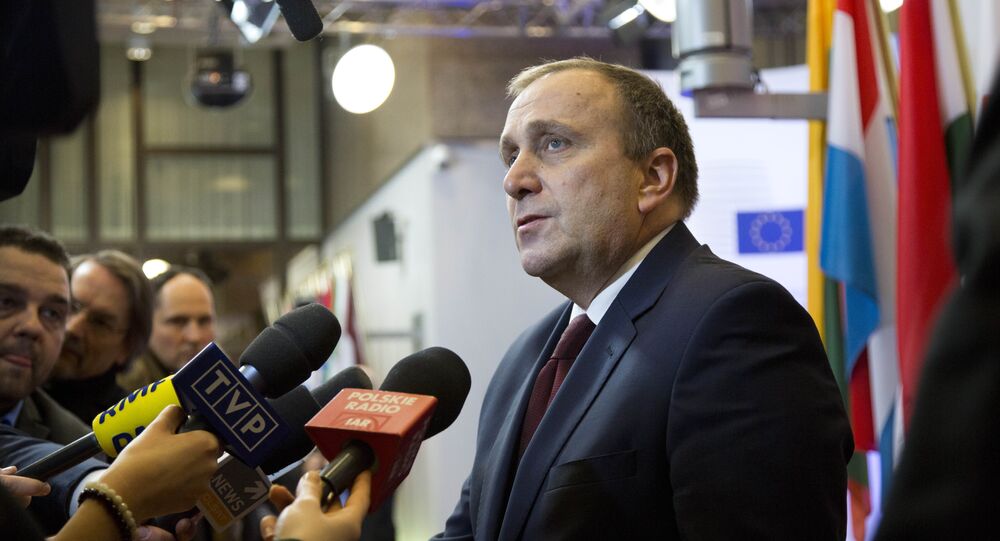 © AFP 2021 / PATRIK STOLLARZ
Poles Depose Chocolate King Poroshenko from Supermarket Shelves
Germany's proposal for a mandatory permanent mechanism to distribute refugees across Europe is a 'catastrophe,' brought about by the needs of internal German politics and will not be accepted by the majority of EU countries, Polish Foreign Minister Grzegorz Schetyna  said on Friday.

The foreign minister was asked about the commitment German Chancellor Angela Merkel made in the Bundestag not to waver from attempts to impose a binding agreement on the distribution of refugees across EU member states.

Such an agreement would go beyond the plan to relocate 120,000 refugees, which was approved at an emergency EU summit last month despite stiff opposition from central European countries, several of which voted against the redistribution plans.

© AFP 2021 / BARTLOMIEJ KUDOWICZ
Polish Ex-Presidential Candidate: Most Refugees are Male 'Peasants Healthy as Bulls'
Despite the opposition, Germany is seeking further plans for mandatory distribution. "We cannot just fix a ceiling and say, 'I don't care about anything above that,'" Merkel told the Bundestag last month.

"These are not the best days for internal German politics in the context of refugees, and so this is an attempt to create a better image. This German approach has no bearing on European decisions. The case is closed," Schetyna told the Polish radio station RFM.

"We will not surrender, because that was the agreement. In this regard, we have a large majority in the European Union."

Schetyna rejected the idea that Germany and Sweden, who have welcomed the bulk of migrants to Europe, should have the ability to impose their plan for a greater redistribution mechanism on the rest of Europe.

"If we in Europe say that we will continue to impose strict distribution for the next wave of refugees, it will be a catastrophe for Europe. There will be no agreements for that."

Instead of making plans to distribute migrants, Schetyna said that Europe should concentrate its efforts on fortifying its borders, and come to grips with the people who have already arrived in Europe.

"We have to take measures to protect our external borders, the hot-spots, and ensure the registration of political refugees from the Middle East in centers, not introduce automatic distribution," said Schetyna.