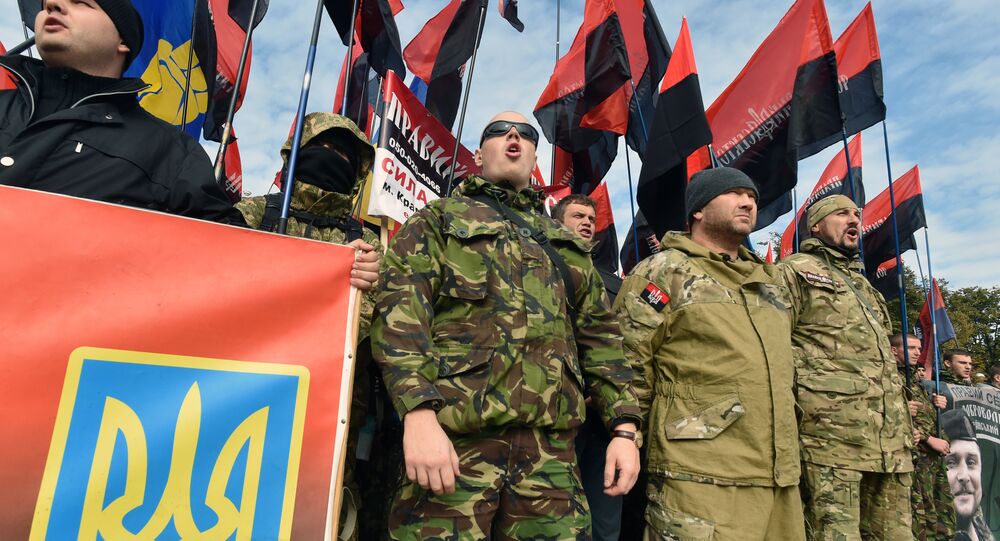 The Kiev 'March of Heroes', carried out today by a collection of Ukrainian ultranationalist political groups, was rocked by an explosion, Ukraine's UNIAN reported.

"About 2,000 came out to the march of nationalists in Kiev." Sign reads: "Bandera come, establish order!"

According to eyewitnesses at the scene cited by Ukraine's UNIAN, the feared explosion was actually just one of the rally participants blowing up a thunder flash grenade. Police have reported no injuries from the blast, but one protester reportedly became ill, developed trouble breathing, and was taken away by doctors.

In all the commotion caused by the rally, most of the estimated two to two-and-a-half thousand participants were said not to have even noticed the explosion.

However, according to a RIA Novosti journalist on the scene, speakers at the rally did notice the gaseous smell resulting from the explosion, suggesting that it may have been carbide. Organizers called on rally participants to prepare for possible "provocations."

"March of the nationalists in Kiev: Thousands of people and the first violations of order."

RIA Novosti also reported that the protesters have since begun a protest outside Kiev's Lukyanivska Prison, where activists from the Svoboda party arrested for mass rioting near the parliament in late August are being held.

According the ministry of interior for the Kiev region, over a dozen people came to the march armed with fireworks, knives and brass knuckles. All these items were reported confiscated, and no arrests were made.

© AP Photo / Alik Keplicz
'Banderite Ukraine, not Russia, is Our Enemy' – Polish Politician
This is only the second year celebrating the Defender of Ukraine Day. It was established by President Petro Poroshenko in 2014 to replace Defender of the Fatherland Day, a corresponding Soviet-era holiday which is still celebrated in Russia and other countries of the former Soviet Union. According to the Ukrainian government, the day was picked because it corresponds with a church holiday dedicated to the Virgin Mary, patron saint of the Ukrainian Cossacks. However, the date's simultaneous association with the Nazi-collaborationist WWII-era Ukrainian Insurgent Army has alarmed many among the country's Russian minority.

Formed in 1942, the Ukrainian Insurgent Army was responsible carrying out a brutal campaign of violence and ethnic cleansing in the territories under their control against tens of thousands of Poles, Russians, and anti-fascist Ukrainians during and after the war.