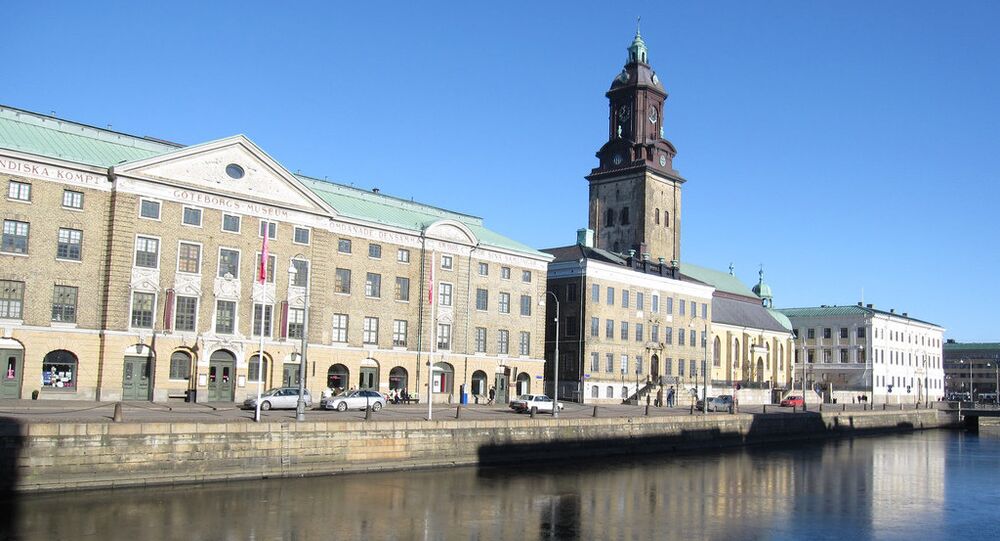 A recent investigation by Swedish daily Dagens Nyheter has found that the Assyrian community in the city of Gothenburg, southwestern Sweden is being threatened by ISIL-inspired messages to "convert [to Islam] or die."

On Tuesday, when Swedish Assyrian Markus Samuelsson arrived at his restaurant in southwest Gothenburg, he found the walls outside covered in graffiti featuring fundamentalist Islamist messages of "Convert or Die" and "The Caliphate is Here."

The graffiti also featured the letter 'N' for 'Nazarene', known to have been written by ISIL terrorists on the doors of Christian families in Mosul prior to the Islamic State's capture of the city last year.

"Houses and shops belonging to Swedish Assyrians in Gothenburg labeled with ISIL symbol."

"Islamist slogans at a coffee shop and a pizzeria in Gothenburg, with the phrase "Convert or die."

According to DN, this is the second case in a matter of days when ISIL symbology has been found spray-painted on local businesses owned by Swedish Assyrians.

"It's awfully uncomfortable; we feel threatened," Samuelsson told the newspaper.

© Flickr / Arild
Swedish Borders Remain Wide Open to ISIL Fighters Disguised as Refugees
The Samuelsson brothers own several restaurants in the southwestern Swedish city of Gothenburg, a city of over half a million which about three thousand people of Assyrian background call home.

Samuelsson found the spray-painted warnings at his bakery. According to DN, despite the fact that the square in which the bakery is located has several other restaurants, only businesses owned by Assyrians were targeted. This was the second time in a week that an Assyrian-owned pizzeria has faced this type of vandalism.

"The messages said, among other things, that 'the Caliphate is here' and 'convert or die'. I felt ill; this is terribly unpleasant and threatening," the restaurant owner emphasized.

The Assyrians, a Christian Semitic group indigenous to the Middle East, are a minority which has been made particularly vulnerable to ISIL violence following the terrorist organization's takeover of much of Iraq and Syria over the past year. Last week, ISIL began executing Assyrian men taken hostage in Syria in February, warning that they would kill as many as 200 more if a $100,000 ransom for each is not paid.

"Our family fled to Sweden from Turkey in the 1970s, and what we are facing now is reminiscent of the stories we were told as children. It's so real and threatening that we are afraid for our safety," Samuelsson noted.

© AP Photo / Jens Meyer
Rise of Right-Wing Security Threat Fueled by Refugee Crisis
People from 26 different nationalities work in the Samuelsson brothers' restaurant chain, and staff were reported to be very upset about the vandalism which took place Tuesday.

Samuelsson has spoken to the police. "I believe that they took our information seriously, but we have not yet received any feedback yet," he noted. "I sincerely hope that they will react to this case with all seriousness. There are people working in the bakery at night, and we are worried that we may be subjected to arson attacks, or something similar," he added.

Josef Garis, the head of the Assyrian district in Gothenburg, told the newspaper that the information is distressing. "No matter who is behind this graffiti, it is painful and traumatic…It feels as if the old persecutions are closing in on us once again," Garis noted.

On Wednesday, the Assyrian community in Gotenburg met to discuss the situation.

Commenting on the graffitied threats on Hujada.com, a local Swedish Assyrian newspaper, commentators voiced their sympathies with the Samuelssons, but also warned that the acts of vandalism may be a 'provocation' aimed at raising hatred toward Muslims.

Some suggested that the "scribblings" could have been made by local ultranationalists, with others noting that even if the graffiti was made by Islamists, "these people do not represent Islam, which is a religion of peace…God forbid that this could have been done by a Christian trying to spoil the name of Islam even more and to provoke Islamophobia."

Others warned of an impending "civil war" between the diasporas, one user saying that he was "afraid" for his future, and preparing "to flee Sweden as a refugee." Another user noted that "one can only hope that the Syrian army now kills the Jihadists at a furious pace, having received the help of the Russians. Wahhabism has weakened; they are a threat to humanity worldwide."

With an estimated population of 120,000, Sweden has one of the largest diasporas of Assyrians in the world outside the Middle East.