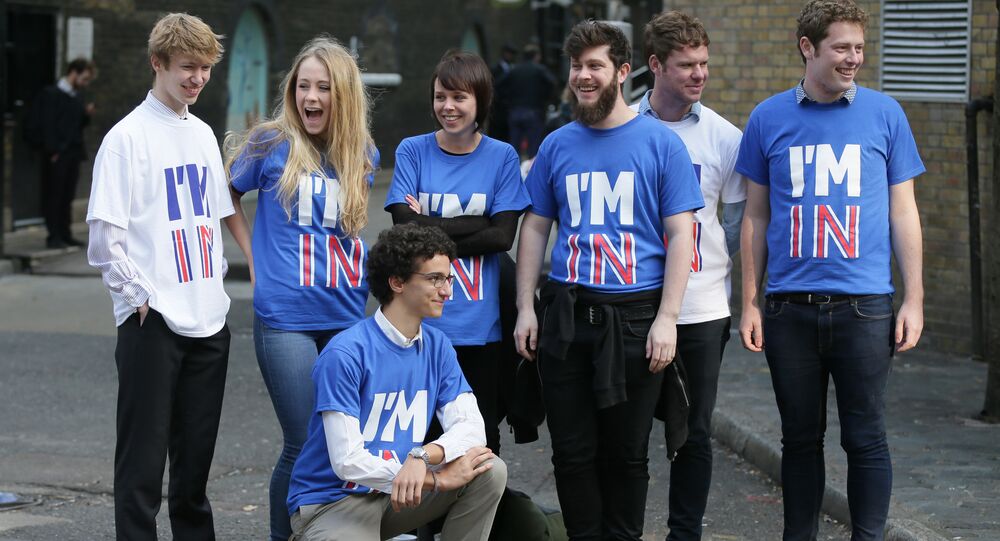 The Brexit debate is heating up in the UK with prominent politicians and business figures from both sides pledging their allegiances to either the 'In' or 'Out' campaigns, leaving Prime Minister David Cameron stuck in the middle of a very difficult situation.

Sir Stewart Rose, the former chief of British retail chain Marks & Spencer has been announced as the chair of the 'Britain Stronger in Europe' campaign group, arguing that a Brexit from the EU would be a "leap into the dark" that would hurt Britain's economy.

Many of the 'In' campaigners, including Lord Rose have argued that while the EU isn't perfect, Britain should remain in the bloc to fight for changes to be made.

Ironic Sir Stewart Rose says leaving EU not worth the risk when, as head of M&S, majority of clothes were, & are still, made outside of EU.

Fears over what impact a Brexit will have on the economy is one of the main pitches being put forward by pro-EU campaigners, concerned that the UK may be denied access from the single market and may be unable to negotiate similar trade agreements as non-EU countries Switzerland and Norway if it votes to leave the bloc.

Britain is stronger, safer and better off in Europe.Watch this video to find out why — then SHARE it to let friends know:

Posted by Britain Stronger in Europe on Sunday, October 11, 2015

Fears over what impact a Brexit will have on the economy is one of the main pitches being put forward by pro-EU campaigners, concerned that the UK may be denied access from the single market and may be unable to negotiate similar trade agreements as non-EU countries Switzerland and Norway if it votes to leave the bloc.

Big business Lords tell us to stay in, little englander financiers tell us to get out. Awful. We need to build an alternative. #EUreferendum

On top of the concerns about the economy is the fear that Britain will lose its global influence if it leaves the EU.

Former Prime Ministers Sir John Major, Tony Blair and Gordon Brown have backed the 'Britain Stronger in Europe' campaign, with Conservative Chancellor Kenneth Clarke warning that Britain would become a "third-rate" power with no international influence if it left the bloc.

The emphasis placed on protecting the UK's interests has been another factor used by 'In' campaigners as part of an attempt to offset the perception that staying in the EU surrenders powers to Brussels, with Lord Rose saying that it's "patriotic" to fight and stay within the EU.

"If we want Britain to be a leader in the world, we need to be in Europe helping to make the big decisions.

"Britain is not the Britain we know unless we are outward-looking, engaged in our continent and engaged in Europe."

The launch of the campaign to keep Britain in the EU has somewhat been sped up by the recent Euroskeptic offensive from those calling on the UK to leave the bloc.

Lord Rose has got it wrong. This referendum isn't about Europe. It's about whether we stay locked in the failed EU project.

Euroskepticism has long been a prominent feature in British politics, with those against the EU concerned that Brussels is overruling London on many key issues.

Many 'Out' activists, such as those backing the Leave.EU campaign, have been concerned about the EU's transformation into an "ever-closer" union, where they argue social and political lines have been blurred.

While 'In' and 'Out' campaigners from the Conservative side of British politics both generally agree that the EU should act like more of a trade union rather than a social one, those pushing for a Brexit argue that Prime Minister David Cameron won't be able to negotiate satisfactory reforms from Brussels, believing the UK should leave the bloc and take care of its own affairs.

There is also heavy criticism of EU red tape, considered by many to be holding back British business and investment, with a cross-party coalition of powerful business and political donors calling for the UK to leave the bloc and develop trade deals in other markets, like China.

Additionally, criticism over the EU's handling of the Greek debt and refugee crises has led many, including some from the left-wing of British politics, to call for a Brexit.

RT @UKIP believes in Britain and will be campaigning to say NO to the EU. RETWEET this if you believe in Britain. https://t.co/pSRveeyQVa

While immigration has traditionally been one of the major concerns for anti-EU activists across the country, the EU's shambolic handling of the refugee crisis has only further strengthened calls for the UK to exit the bloc and control its own borders. Alternatively, left-wing politicians have become increasingly disheartened with Greece's treatment at the hands of the Eurozone, arguing that the EU is ultimately controlled by top bureaucrats.

Cameron in the Middle

The situation is becoming an increasingly tricky one for David Cameron who is floating between both camps.

While Cameron has publicly declared that his preference is for the UK to remain in the bloc under a reformed EU, he has warned that if negotiations are unsuccessful, he may campaign for a Brexit.

So, in essence, the prime minister is playing a delicate balancing act; hosing down Euroskeptic sentiment — including that from within his own party — on one hand, while trying to put on a brave face and stand up to European leaders on the other.

With Cameron's preference to remain in the bloc, the PM had been urged to hold the referendum next year to avoid clashes with the German and French national elections in 2017.

However, the recent Greek debt and refugee crises have meant that little attention has been paid to Britain's demands, with reports Cameron may delay the vote until the end of 2017 to give himself more time to win support for proposed reforms.

Highlighting the increasingly tough situation facing the PM, business officials warned against delaying the vote, saying that it would merely add to the uncertainty and damage British investment in the meantime.

As time rolls on, the debate is set to continue on whether the UK should leave or stay in the EU, with David Cameron hoping to get himself out of a very tight and tricky situation.