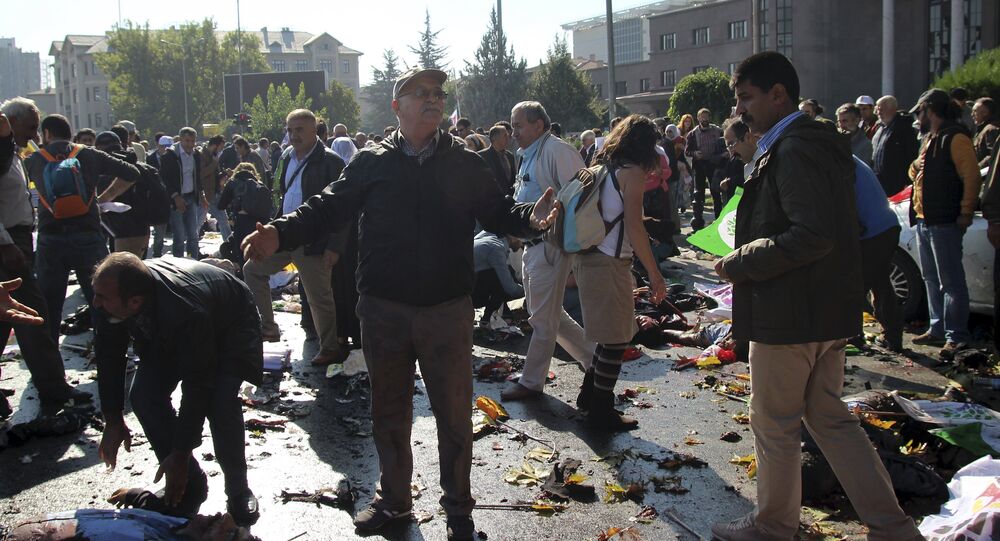 The leader of Turkey’s pro-Kurdish party blamed the country’s ruling Justice and Democracy party for the deadly explosions that rocked Ankara on Saturday and killed at least 95 people and injured nearly 246 others.

© REUTERS / Tumay Berkin
Turkey Suspends Election Campaign for 3 Days Amid Ankara Deadly Explosions
"Unless the JDP unequivocally distances itself from the terrorists, the lives of our people will remain at risk every day and every hour,” Selahattin Demirtash, the leader of the pro-Kurdish people’s Democracy Party told reporters hours after the attack.

“We do not believe that the organizers of this terrorist act will be found and brought to justice or that anyone in the government will resign. If they do not resign then their leaders are apparently content with the situation… This terrorist act is not aimed against our state and the unity of our people, it is an attack on the people by the state,” Demirtash added.

The two explosions occurred seconds apart outside the capital's main train station as hundreds of opposition supporters and Kurdish activists gathered for a peace rally organized by Turkey's public workers' union and other groups.

The protesters planned to call for increased democracy in Turkey and an end to the renewed violence between Kurdish rebels and Turkish security forces.

Authorities are exploring the possibility that the blasts may have been caused by two suicide bombers.

There was no immediate claim of responsibility but Prime Minister Ahmet Davutoglu said there were "strong signs" that the two explosions — which struck 50 meters apart just after 10 a.m. — were suicide bombings. He suggested that Kurdish rebels or Islamic State group militants were to blame.