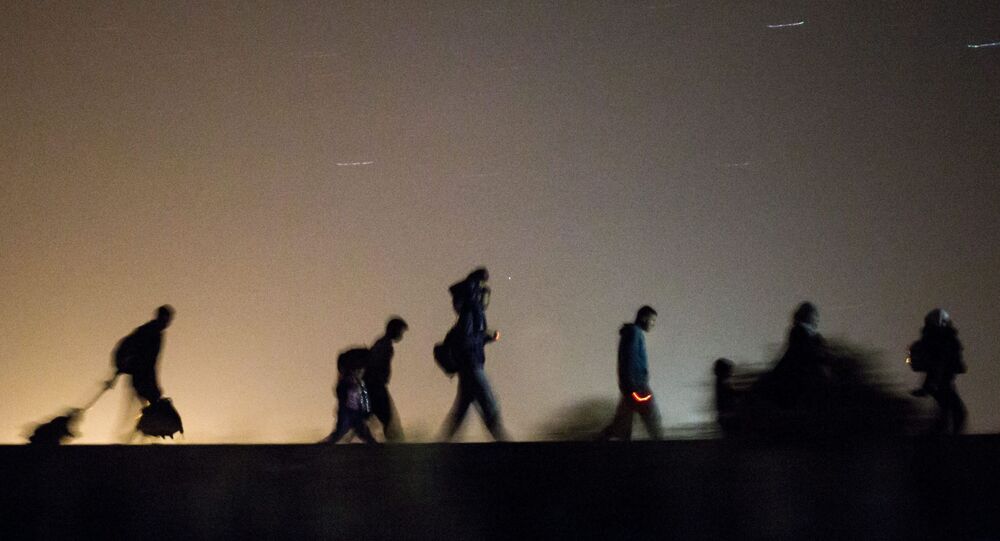 Hungarian politicians are using the refugee crisis for their own advantage, stirring up nationalistic sentiments as a part of their PR-campaigns, a local tourist manager told Sputnik on condition of anonymity and revealed something that might be a very inconvenient truth.

Vasily Raksha — And the refugee issue in Hungary is just the tip of the iceberg.

“The first and foremost thing that you should know to understand the situation in Hungary is that politics aggressively meddles into the life of citizens and that the Hungarian society is strictly split in two parties: the national and the liberal-democratic.”

Nationalist-oriented political parties and movements, such as the ruling Fidesz party headed by Prime Minister Viktor Orban and “new nationalists”, for example the Jobbik party, resort to the same strategy: they stir up public nationalism in order to gain more weight and power, Gyula explained.

© AFP 2020 / Bulent Kilic
Hungary Must Close Borders to Stop Terrorists Getting Into EU With Migrants
Jobbik looks even more right-wing, calls for immediate secession from the EU, wants to “resolve the gypsy issue”, and also promises to raise the salaries of multinationals’ employees to 80 percent of their counterparts in the West, which is nothing other than populist slogans.

But why did these parties decide to place their bets on nationalism?

The tourist manager elaborated that Hungary has never actually been independent: be it the times of Austria-Hungary, a period in the Socialist bloc or the current EU membership. These politicians believe that the nation longs for absolute independence, and present every problem under a nationalist angle stating that it threatens the Hungarian identity.

The same happened during the migrant crisis that our interviewee described as a good example of an international issue becoming internal.

The migrant crisis for Hungary began after the Charlie Hebdo attack in Paris in January 2015, followed by Viktor Orban’s pledge not to let any migrants in. An aggressive hatred campaign was launched with banners reading “We want to remain a clean Hungary”, “We won’t give away our jobs”, and “You have to abide by the Hungarian laws”.

The point is that, according to Gyula, such slogans emerged before the actual migrant influx and were written in Hungarian, thus having the local population as their target audience. The message was: “We defend our country”. But against whom?

“It is clear that migrants do not want to stay here. They just want to move further. But the state propaganda wants Hungarians to think that the whole world views Prime Minister Viktor Orban as a savior of Christianity and Europe, as a hero,” Sputnik’s interviewee stated.

The politicians well succeeded in conducting their hatred-based PR campaign of intimidating the Hungarian population so that people became afraid of migrants before they first arrived at the border in mid-Summer.

“Some 80 percent could now say that ‘I hate migrants, I will fight against migrants, I will protect my job from them,’ though migrants have never been and might never appear in the country’s north-east, for example.”

The ridiculous point is that the authorities were unprepared to tackle the problem when it happened. They were simply caught off guard by its scale, earlier hoping that the crisis would last only a couple of months.

© AP Photo / Santi Palacios
Not Welcome Here, You Can Go Back: EU Gets Tough on Refugees, Plans to Send Asylum-Seekers Back
As for his personal attitude toward the refugees, Gyula said that he felt compassion to them and that he ruled out any threat that the asylum-seekers could pose, as they are not going to stay in Hungary.

He criticized the authorities for turning the population against migrants and added that even civic organizations will be forced to abstain from helping them. Only individuals try to support the incomers, though there is a severe humanitarian crisis.

Denying claims that migrants may complicate the lives of Hungarians, Gyula said:

“What sorts of jobs can a poor Syrian, who doesn’t speak the language, who doesn’t know the culture, ‘steal’ from Hungarians?  Yes, there are some contrabandists among them, but the majority are normal people who didn’t want to lose their life aimlessly.”

According to Gyula, there are three options during a civil war: to fight with one of the warring parties, to keep a low profile waiting for peace and to flee the country, and those who choose the third way should not be blamed.

“If a person decides to cross the Sahara Desert [to reach Europe], just imagine what his life was like in his homeland if he had to take such a risk.”
When asked to comment on the video issued by Asotthalom Mayor Laszlo Toroczkai addressing migrants and saying that “Hungary is a bad choice, Asotthalom is the worst,” Gyula just gave up on it:

“One of the extremists.”

The state has spent 10 billion forints [32 million euros] to construct the border fence, whereas only 78 million forints [250,000 euros] have been allocated to help refugees, Gyula added. Shouldn’t it be the other way around?