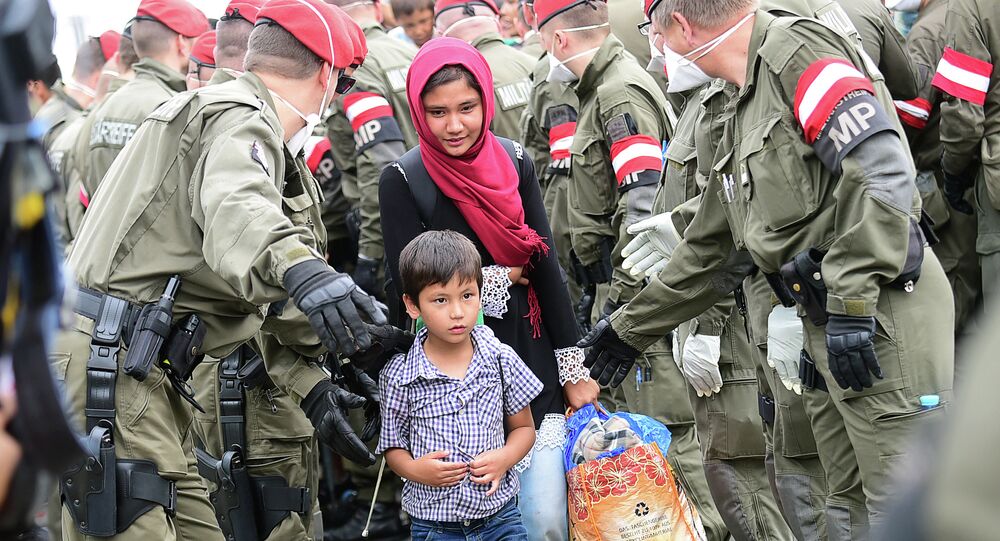 The connection between the Taliban and Europe, an Afghani’s attitude to marrying a European girl and the religion of ISIL tormenters – all good food for thought in this interview.

Vasily Raksha — Twenty-two year-old Muhammad Akbar had to flee his homeland Afghanistan because of Taliban violence that had been chasing him since childhood. His father studied in Moscow and worked for the Afghani government. When Muhammad was only four, Taliban militants killed his father just because of his job.

He spent only six years at school and started working as a cell phone salesman because he was the sole child in the family and had to support his mother.

As the situation grew more and more dangerous, Muhammad and his mother moved to Pakistan and then to the Netherlands, from where he was deported and has spent five months in a refugee camp near the Hungarian village of Vámosszabadi  in the country’s north-west.

“I am worried about my mother. The Dutch government gave her a house but she doesn’t speak the language and she is 50, she is alone there and has a lot of problems, she can’t even go shopping or read.”

Muhammad dreams about rejoining with his mother in the Netherlands.

“I would like to work there as a car engineer, I love this work”.

Ninety Percent of Migrants are Refugees Saving Their Lives

Once a day a bus transfers asylum-seekers from the camp to the neighboring town of Gyor to enliven them. Some go shopping, some meet with friends.

The camp offers practically no entertainment, but for a single TV-set for all, the guy said. Nor does it offer jobs. As we are walking through the streets heading to a McDonald’s in the town center for a cup of coffee, Muhammad loudly complains about the hostile attitude of locals toward migrants, and passers-by meet us with cold looks.

He said that Hungarians often discriminate refugees when they learn about their religion, origin and inability to speak Hungarian or English.

“They treat us like animals. They simply stop talking to us when they learn who we are.”

© AP Photo / Santi Palacios
Not Welcome Here, You Can Go Back: EU Gets Tough on Refugees, Plans to Send Asylum-Seekers Back
Fortunately, other people bring humanitarian aid to social relief centers where migrants can take it.

Muhammad stood against an opinion that the majority of incomers are actually stowaways seeking easy money in flourishing EU countries, infiltrating under the guise of refugees.

“We all want to go home. I love Afghanistan and I will go there as soon as the war ends. No one wants to stay in Europe. Would you want to abandon your family and go so far? No! Yes, there might be some 10 percent of those who may commit crimes, come for sex and drugs. But 90 percent are saving their lives! I would have never come here.”

The young man underscored that a clash of civilizations, something that Europeans fear, is not imminent. He is single and has no kids, so a wedding in Europe may become his personal experience of interaction between cultures.

“If I marry a European girl, I will do it in the Muslim way, and she should follow. But if we really love each other but she does not want to convert to Islam, I will not push her. I will neither force her to wear a scarf. If we love each other, we can resolve it. Everyone is free. And everyone has his own life.”

The One-Way Choice ‘Offered’ by Taliban

Muhammad elaborated that the Taliban poses the deadliest risk for Afghanistan and forces people to make a risky decision.

© AFP 2020 / ARMEND NIMANI
It’s Not Just About ISIL: Insider’s View of Refugee Issue and Middle East Violence
The right choice seems obvious but extremely dangerous. That’s why a lot of people have decided to undertake a long journey to the safe Europe – to leave such choices behind.

Entering the McDonald’s, Muhammad invites us to be his guests and wants to pay for us, though just four minutes ago he was grumbling over a ‘pitiful’ hundred euros allotted for food plus 20 euros given as pocket money for a month. We kindly take over the initiative noticing that Muhammad feels a bit embarrassed: an Afghani host should treat his guests disregarding his own poverty, a tradition says.

ISIL Has Nothing to Do With Islam

The refugee slammed ISIL for unjustifiable atrocities: those who commit them cannot be Muslims.

“They are killing everyone, they are killing children,” Muhammad said with a frightful disgust. “A kid is going to school, a kid is playing. He does not understand anything. What did a kid do to them [ISIL terrorists] so that they kill him? Our holy book Quran prohibits a Muslim to kill another Muslim and states that all Muslims are brothers. In my opinion, those who kill humans cannot be Muslims.”

He thanked Russia for doing the right thing of defeating ISIL.

“If not Russia, someone else has to do it”.

Muhammad has a compassionate heart. Some 25 days ago, when migrant crowds were rushing across Hungary, he helped them do it by preventing accidents, using his good command of English and five Asian languages.

Several Hungarian young men took their seats at a table nearby, with one of them having huge tunnels in his ears – something that might seem a culture shock for a man brought up in the Muslim culture, some may suggest. But Muhammad said that everyone was free to choose their way of life and fashion.

At the end of our meeting Muhammad took his iPhone 4 and showed us a picture of himself – with a trendy haircut and trimmed mustache, all in accordance with the latest fashion, and a ring piercing through his right eyebrow. We could never recognize him on this photo that would well suit a glossy magazine for hipsters.

“You see, I play the guitar a little bit. I used to be a trendy guy, but then I felt depressed because of all of this… But now my heart feels warmer,” he said with a smile and put his hand on his chest.