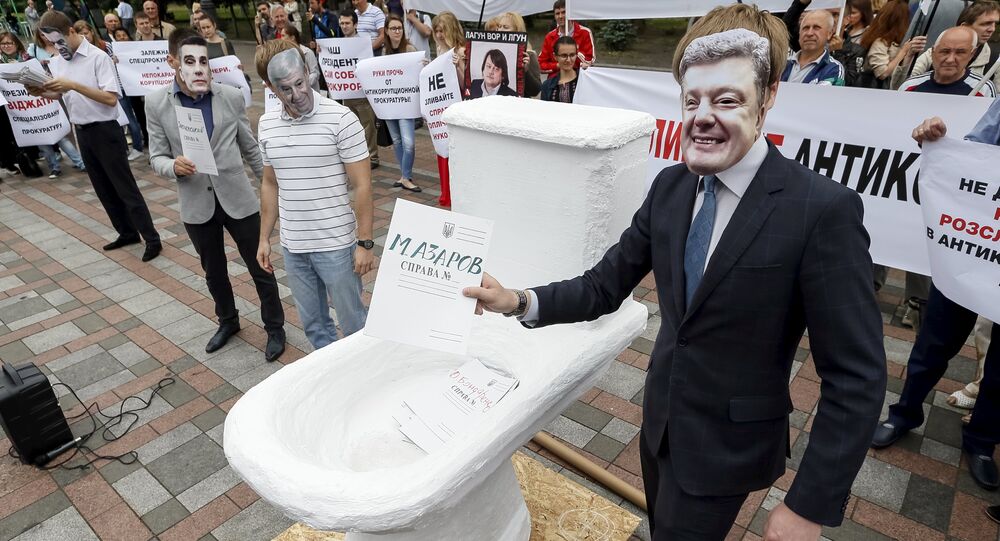 Eighteen months after the Maidan “revolution” in Ukraine, the West is getting increasingly worried by the rampant corruption in Kiev’s corridors of power and the price it has to pay for the money-hungry Ukrainian bureaucracy.

© AP Photo / Efrem Lukatsky
No More Money for Ukraine Unless Kiev Gets Rid of Corruption - Biden
Bloomberg Business took interest in the foreign bank accounts of Prime Minister Arseniy Yatsenyuk and, with some help from its sources at the US Treasury Department in Washington, found out that the main transactions there coincided with the arrival of new loan installments provided to Ukraine by the IMF and other international donors.

The sums arriving at the Premier’s bank accounts were in stark contrast with his monthly salary of just $200.

Ukraine’s Western sponsors also want to know the whereabouts of the $150 million earmarked for the construction of the so-called “European Rampart” or “The Wall” along the Ukrainian-Russian border.

All Mr. Yatsenyuk could serve up were just 200 meters of barbed wire on concrete posts…

Arseniy Yatsenyuk is not the only one suspect in the hard-hitting corruption scandal.

Boris Lozhkin, a presidential deputy chief of staff, has found himself in the midst of a corruption investigation being conducted by Austrian police, and Interior Minister Arsen Avakov is suspected of stealing tens of millions of dollars of taxpayers’ money.

The information to this effect was published by Serhiy Leshchenko, a Verhovna Rada deputy who many say is also in the employ of the US embassy in Kiev.

Speaking at a financial forum in Odessa, Mr. Pyatt described the Ukrainian Prosecutor General’s office as a pillar of Ukrainian corruption.

With the country’s top prosecutor, Viktor Shokin being a longtime friend of President Petro Poroshenko and reporting directly to him, Ukraine’s Western sponsors apparently believe that the government, the presidential administration and the MPs are all parts of a single corrupt whole and that pumping more money into such a regime simply makes no sense.

And that its end may not be too far off now…