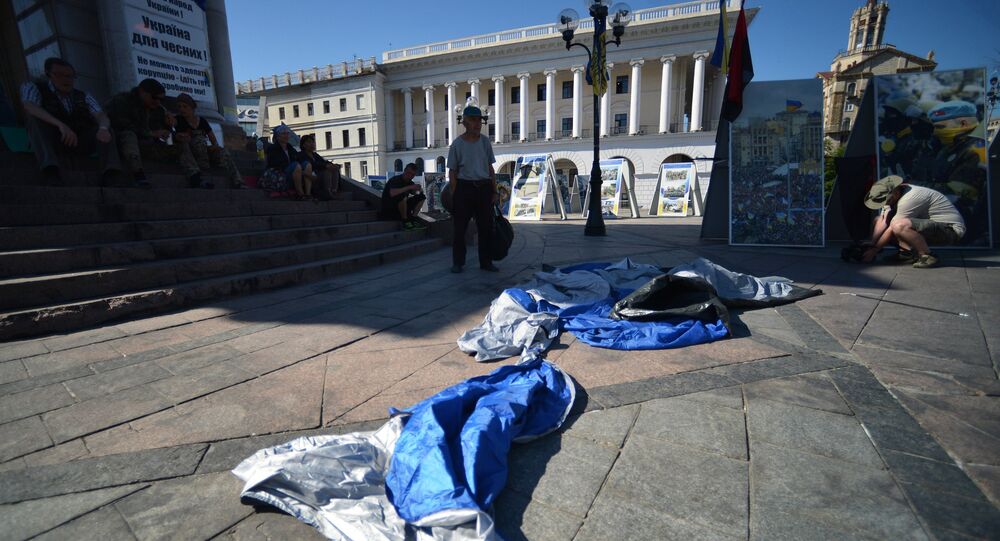 With the guns in Donbass silent for nearly five weeks now the Ukrainians’ attention is shifting back towards the ideals of the 2014 Maidan revolution only to see that many representatives of the corrupt regime of former president Viktor Yanukovych have retained their seats in the ministries and security services alike, German media wrote.

© REUTERS / Gleb Garanich
New Maidan in the Making in Ukraine – Russian MP
What the Maidan protesters demanded was a democratic, open and Western-oriented country where everyone would have equal chances for success, Frank Hofmann, the head of the Kiev bureau of Deutsche Welle, wrote in a comment.

Almost two years on, these demands are still ignored by kleptocratic representatives of the old oligarchic establishment. President Petro Poroshenko took more than a year to finally bring to oath the first detectives of the newly-formed National Anti-Corruption Bureau, Hofmann added.

Meanwhile, increasing reports of new cases of corruption and shady schemes keep flowing in implicating the builders of a new cap over the crippled Chernobyl nuclear reactor and even the country’s interior minister.

Many Ukrainians are rightfully proud of their new police in gleaming US uniforms many Maidan activists readily joined.

However, the country still has to wait until November 7 to finally say goodbye to the outgoing police force the old elite so successfully used to line their pockets, Frank Hofmann continued.

Many suspect that despite his public calls to fight the oligarchs, President Poroshenko is in no hurry to send them packing, including the coal and electricity magnate Rinat Akhmetov, whose coalmines are primarily located in Donbass.

© REUTERS / Valentyn Ogirenko
Ukraine Violence Sparked by Right-Wing Militants Linked to Maidan Riots
As to the Maidan activists, many of them work as volunteers at federal ministries, and old-style politicians, led by Prime Minister Arseniy Yatsenyuk, never miss a chance to sing their praises while never allowing them anywhere near the corridors of real power. All this means that  the old system of corruption and cronyism hasn’t gone anywhere, Frank Hofmann noted.

Small wonder why the number of Ukrainians, especially Maidan activists, who no longer trust the government, is growing fast and chances are high that the rightwing radicals may capitalize on this public discontent during the upcoming local elections.

It looks like it may take Ukraine another Maidan revolution to finally get on track to a democratic future.

“This is the hard reality the government will finally have to wake up to and the European Union would be best advised to actively help the people who want their dream of a democratic and free Ukraine to finally come true,” Frank Hofmann wrote in conclusion.

New Maidan in the Making in Ukraine – Russian MP