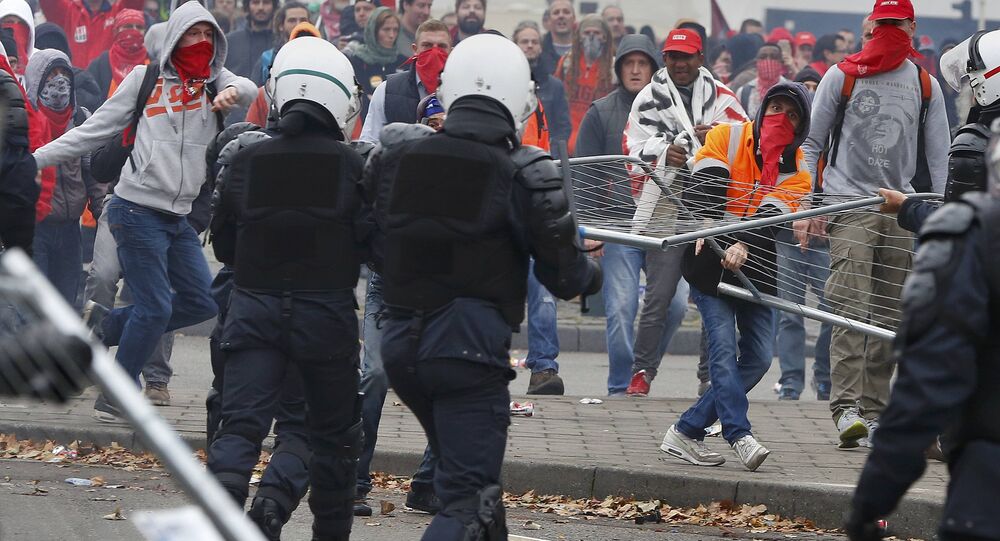 Anti-austerity demonstrators have clashed with police in Brussels. Around 80,000 thousand people, many of then union members, marched against the coalition government's cuts to social benefits.

According to local media reports, the demonstration began peacefully, but descended into violence after protesters wearing balaclavas arrived. Reports in local media suggest that the clashes erupted between dock workers from the northern port of Antwerp and police officers.

Further public indignation was triggered by an increase in the retirement age to 67 years from 65.

Reports on Twitter show protesters setting off small explosions and smashing the glass doors of the Brussels Hilton Grand Hotel. Police, being pelted by the crowd, responded with tear gas and water cannon as tensions erupted outside Brussels South Station.

The protest is one of the biggest Brussels has seen in recent years, staged by Belgium's three largest unions. Speaking out against austerity, the unions accused Prime Minister Charles Michel of favoring big businesses over the country's workforce.

The anti-government demonstration comes days after a multi-trillion dollar Trans-Pacific Partnership (TPP) treaty was signed in secret in America — and at the same time a three million signature petition was handed in to the European Commission in Brussels, calling for an immediate end to negotiations on the Transatlantic Trade and Investment Partnership (TTIP) in Europe. John Hilary, War on Want's executive director said:

"The three million signatures collected for this petition shows that the people of Europe are against these corporate driven trade deals. The people of Europe have spoken, the politicians must no longer turn their back on their constituents."