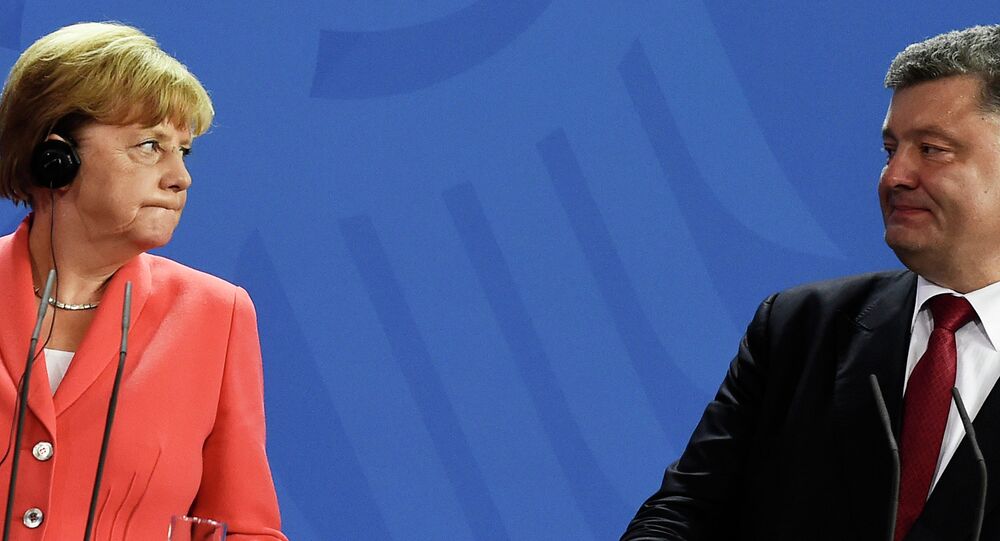 Faced with the consequences of the Syrian crisis, European leaders have completely forgotten about Kiev, putting it on the back burner even at a Ukraine reconciliation conference, RT journalist Bryan MacDonald wrote.

Ukraine was never a matter of life and death for Europe, and presently, western politicians and media pay much less attention to President Petro Poroshenko than they did before.

© AP Photo / Evgeniy Maloletka
Kiev Begins Withdrawing Heavy Arms of Under 100mm From Line of Contact
Europe has had enough of the failed attempts to fight corruption and of the anti-Russia sanctions saga, the columnist wrote. Many Kiev analysts admit in a one-to-one talk that corruption in Ukraine has grown since the Yanukovich era. Even though the country's constitution prohibits state officials to own businesses, Poroshenko ignores the law and by now is Europe's richest head of state while presideing over its the poorest country.

German Chancellor Angela Merkel and President of France Francois Hollande are fed up with this, the journalist stated.  The only reason Europe hasn't lifted the sanctions yet is the pressure from Washington.

Last week western media, which used to promote Poroshenko in the past, barely noticed his speech at the United Nations General Assembly. Very few wrote about Ukrainian delegation leaving the assembly hall. Poroshenko knows the game is over, the journalist assumed.

© REUTERS / Andrew Kravchenko/Pool
Odessa Protesters Demand Poroshenko’s Resignation
On Friday, Ukraine found itself put aside at its own peace conference. The columnist cited a Russian source saying that Hollande never even spoke of Ukraine during a private dialogue with Putin, focusing on the situation in Syria instead. As for Merkel, she finally accepted the fact that Crimea will stay a part of Russia.

Europe is currently picking up the pieces after the failure of US policy in Syria. Merkel's positions have been shattered as a result of her immigration policy. Schengen is also going to smash as open borders are not so popular anymore. It's natural that Europe couldn't care less about Ukraine, the columnist concluded.

Ukraine's President Failing on All Sides – US Analyst