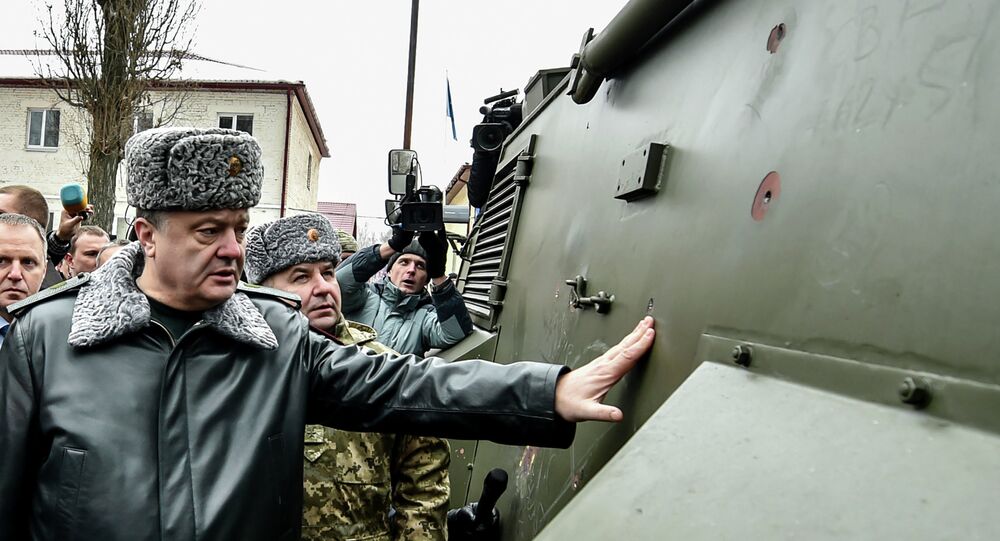 Barack Obama ordered to supply Ukraine with new defensive weapons. A step toward reconciliation, you say?

"He [US President Barack Obama] told me that he signed an executive order on the delivery of new weapons to Ukraine, that we desperately need, since this is defensive armament, long range counter-battery radar complexes which will allow us to increase the defense capabilities of the Ukrainian army," Poroshenko said in an interview to Ukrainian TV channels.

"The main result is that we moved from a ceasefire regime, after withdrawing troops, enhancing the OSCE role,… to an armistice regime [in Donbass],” Poroshenko said commenting on the Normandy Four talks in Paris on Friday.

© Flickr / The White House
US Trying to Destroy Russian-Ukrainian Brotherhood Via Puppets in Kiev
"In case the elections [in Eastern Ukraine] are conducted fairly, in case they are organized well in accordance with the OSCE ODIHR [Office for Democratic Institutions and Human Rights] criteria, in case there is Ukrainian media present, Ukrainian parties, in case the elections are recognized by international observers, then they will elect those with whom we would restore the country," Poroshenko said.

Ukrainians are scheduled to vote in local elections on October 25.

The breakaway parts of Donetsk and Lugansk regions plan to hold local elections on October 18 and November 1 respectively.

The self-proclaimed republics have repeatedly stated that the decision to hold elections independently from Kiev was made after the Ukrainian government proceeded to adopt a law on local election without consulting with them, which contradicts the Minsk peace deal.

© Sputnik / Stringer
Donetsk Republic Vows Response if Kiev Starts Preparations to Join NATO
Since April 2014 the Ukrainian Armed Forces have been waging wag against Donbass independence supporters who rejected the legitimacy of the coup-imposed Petro Poroshenko's regime and proclaimed the Donetsk and Lugansk People's Republic.

He added that Ukraine, as well as France and Germany, opposes any changes in the deal.

In February, the Normandy Four group, comprising Russia, Ukraine, Germany and France worked out a ceasefire deal in Minsk, Belarus, signed by Kiev and the Donbass Republics.

Ukraine's President Failing on All Sides – US Analyst

McCain: Proposed US Defense Bill Would Give Ukraine ‘Defensive Weapons’

US to Allocate $20Mln to Ukraine for Military Training, Defense Services