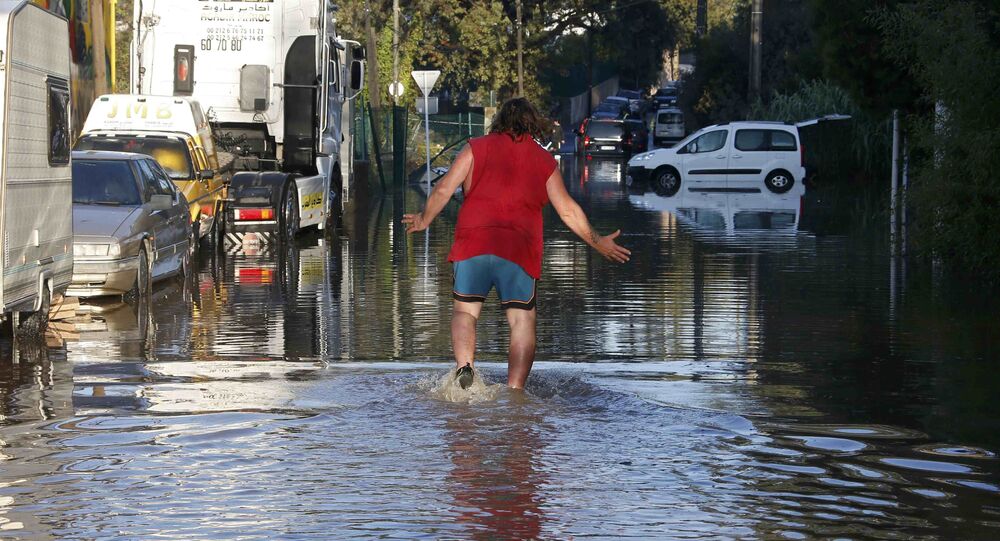 The President offered condolences to the families of the victims  and pledged government assistance to all those affected by the disaster.

© AFP 2021 / JEAN CHRISTOPHE MAGNENET
A boy stands next to rubble and damaged cars after violent storms and floods in Biot, southeastern France

The city of Nice is estimated to have received 10 percent of its average yearly rainfall in two days alone. The river Brague burst its banks, sending water gushing into nearby towns and cities.

Three elderly people drowned when floodwaters inundated their retirement home near the city of Antibes.

Others died trapped in their cars in tunnels and underground car parks as the waters rose.

© AP Photo / Lionel Cironneau
A man carrying his bicycle tries to make his way after floods in Biot, near Cannes, southeastern France

The areas worst hit by flooding were also the hardest to access, officials said, raising fears the death toll could rise. About 27,000 homes remained without power early on Sunday, 14,000 of them in Cannes.

The Elysée palace announced on Sunday that victims of the flooding will receive help from the state under a French law that gives compensation to victims of natural disasters.

© REUTERS / Eric Gaillard
People look at an abandoned car trapped in muddy waters near an underpass after flooding caused by torrential rain in Cannes, France

A tweet from the president’s office said it would be paid within three months.