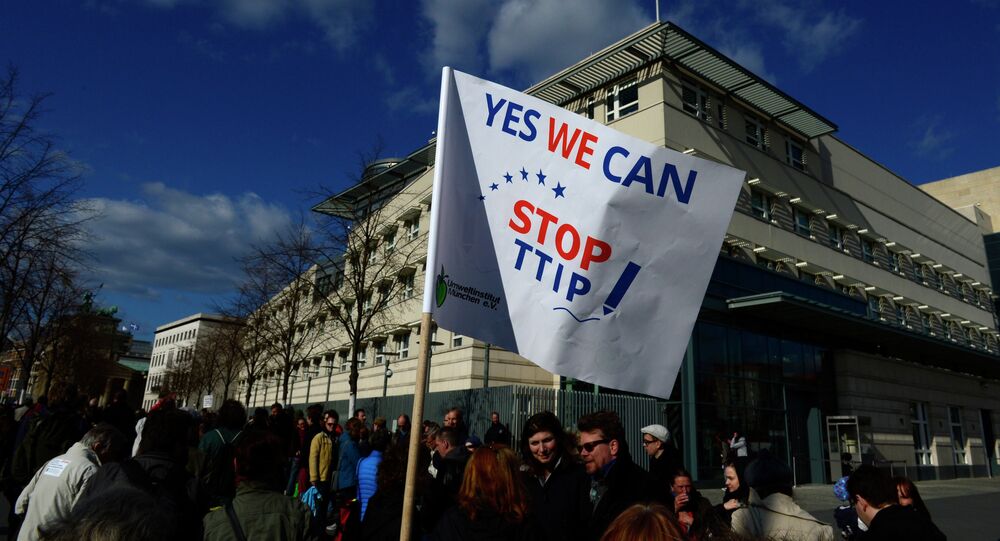 STRASBOURG (Sputnik), Daria Chernyshova – A hotly-debated trade pact currently in negotiation between the European Union and the United States would, if ratified, change the playing field for non-EU members including Switzerland, a Swiss lawmaker from the FDP-Liberals party told Sputnik on Thursday.

The controversial Transatlantic Trade and Investment Partnership (TTIP) has been strongly criticized the strict secrecy of its negotiations and leaks detailing undue benefits the deal would afford multinational corporations.

"For Switzerland, the framework, the level playing field will be changed, this is for sure. We better hurry up to fight for better conditions," Doris Fiala said.

© Sputnik / Alexei Druzhinin
Switzerland ‘Scales Up’ Humanitarian Aid to Refugees - Foreign Minister
"This treaty will affect Switzerland," Fiala said. "This is not only the question for Switzerland, but for all third party countries, for all other countries that are not members of the European Union, this is quite important."

She noted that Switzerland was good at being a trading partner with other countries, pointing to an until-recently-struck free trade agreement with China.

"With a very strong Swiss frank, with very high salaries, Switzerland already has very tough competition compared to other countries, so free trade is a very important subject if you want to cope with it," Fiala said.

© AFP 2020 / FABRICE COFFRINI
Switzerland Investigates Top Banks Over Precious Metal Prices Manipulation
The TTIP seeks to streamline and deregulate trade between what would become the world’s largest economic zone, spanning the Atlantic Ocean and accounting for 60 percent of global production.

According to those who have seen the closely guarded text, the trade pact includes stipulations that would enable multinational corporations to sidestep and even prevent sovereign governments from implementing national and international law.

Switzerland has been politically split on whether to maintain bilateral deals with the European Union or restrict immigration by EU citizens into the country, Fiala added.

"On one side we have bilateral contracts, and on the other side we have this wish of the population to reduce the foreigners a little bit," Doris Fiala said.

© AFP 2020 / Tobias Schwartz
US, China, EU Unlikely to Sign Snowden Treaty as They Have Much to Hide

"We are almost victims of our own success, and nobody could imagine that we would have 80,000 people per year entering Switzerland," she said.

"Personally I have a very clear opinion, I say yes to the bilateral contracts, I say that we must hurry up to make our infrastructure better to cope with this migration, but there is a lot of work to do, a lot of dialogue to do," Fiala noted.

Switzerland will hold parliamentary elections in a week. The upcoming vote will be held against a backdrop of souring relations between Switzerland and the European Union over migration curbs. Last year, the Swiss people voted in a referendum to introduce quotas on EU migrants beginning 2017.

US, EU Seek to 'Lower Standards, Not Trade Freely' by Signing TTIP Deal