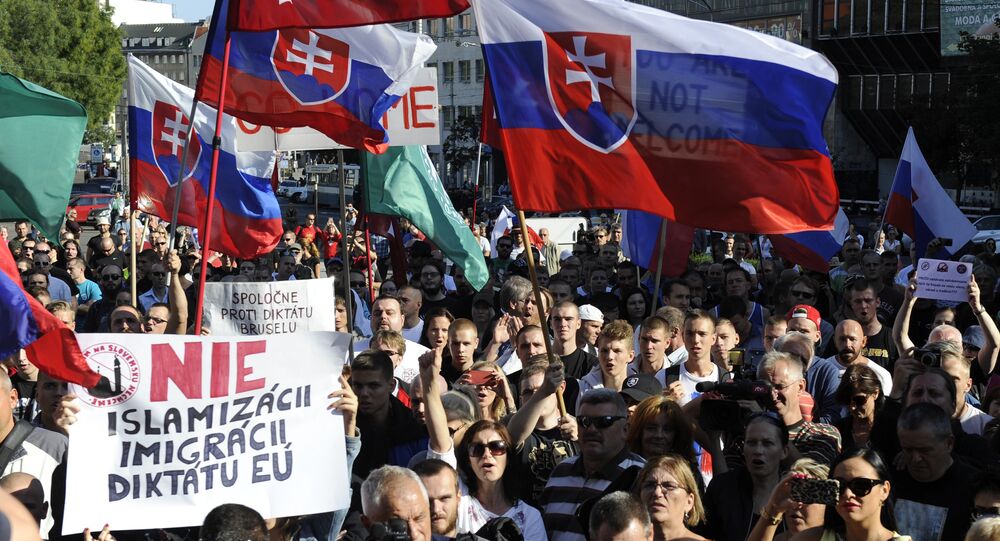 European Union leaders have bickered for months over how the EU should handle the refugee crisis with many countries refusing to sign up to a proposed system to relocate 120,000 asylum seekers.

Member states have reacted angrily to the hundreds of thousands of migrants making their way to Europe by building walls and fences to reinforce their borders  — shunning the ethos of 'an ever closer union'.

Slovakia and Czehc Republic do not want to take any refugees, even though EU orders them to do so.. #dkpol #svpol pic.twitter.com/SK37Goj3aN

But now one country has taken it a step further and has decided to take Brussels to court in defiant rejection of the imposed refugee quota system.

Outvoted by other European Union states obliging Slovakia to take in around 800 refugees from Italy and Greece, the Eastern EU country has reacted by taking legal action to overturn the plan.

The Slovakian government has formally instructed lawyers in the justice ministry to file a legal challenge at the EU court in Luxembourg, under article 263 of the EU treaty.

The article stipulates that states can query decisions made in the European Union "on grounds of lack of competence, infringement of an essential procedural requirement, infringement of the Treaties or of any rule of law relating to their application, or misuse of powers."

Slovakia has only two months to challenge the ruling by the EU that member states must share in a quota for resettling 120,000 refugees and asylum seekers across the union. But Slovak Prime Minister, Robert Fico, says he's serious and that all political parties in the country oppose the scheme.

Gabcikovo, a small town with just 5,000 residents recently held a vote asking residents if they were happy to take in refugees — and 97 percent of the people voted 'No'.

Fico believes the final decision should have been made in the European Council where he would have been given a chance to use his power to veto the decision.

© Flickr / Special IG for Afghanistan Reconstruction
Slovakia to Use US Fortification to Build Border Fence With Hungary
And he wouldn't have been the only one. Hungary, Romania and Czech Republic have also refused to sign up to the enforced quota system — but they have all been outvoted by other member states.

Choosing to go it alone and legally challenge the EU, Slovakia is rejecting the binding principles of the European Union. The EU's plan to redistribute refugees is based upon article 78 of the treaty, which allows action to be taken if a member state is "confronted by an emergency situation characterized by a sudden inflow of nationals of third countries."

Europe is gripped by the worst refugee crisis since the Second World War, as countries continue to fight amongst themselves.