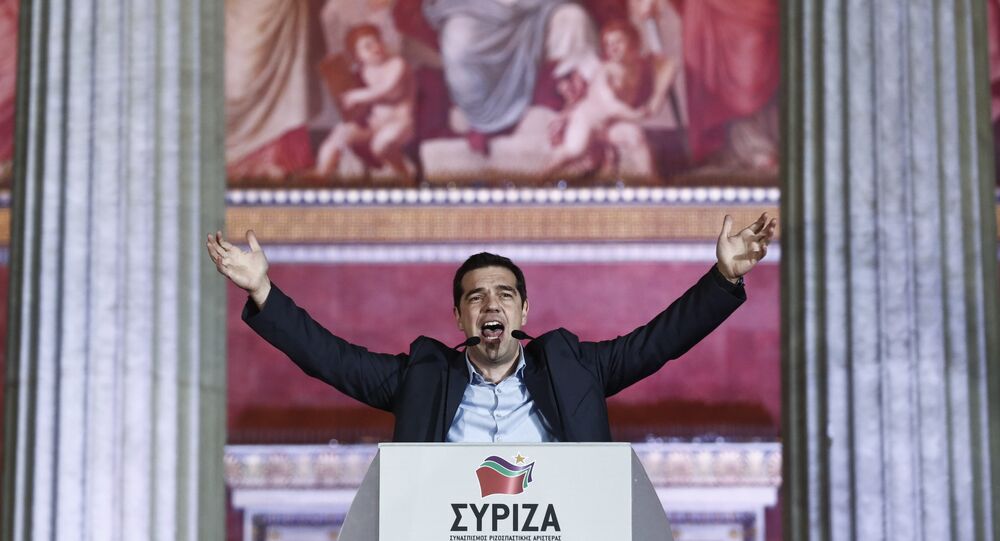 The 12 Labors of Tsipras

Greek Prime Minister Alexis Tsipras is labored with problems on an epic scale, following recent discussions with his foreign minister, Nikos Kotzias and US Secretary of State, John Kerry.

Well, Tsipras has already done that by killing the country's dream of no more austerity.

© AP Photo / Thanassis Stavrakis
Commuters wait at a bus stop as the banner, left, reading "NO, we are writing history" and poster behind reading "YES to Greece" referring to the referendum in Athens, Thursday, July 2, 2015.

The Greek people voted 'No', but Tsipras said 'Yes' to Eurozone ministers — in return for golden apples and remaining in the currency union — however, paving the way for harsher times for the Greek people.

3. Capture the Cerynian Pension Hind — Without Hurting the Old Folk

Tasked with slashing pensions and lowering child benefit, Tsipras must find the right financial formula that won't punish the most vulnerable in society.

Since tough financial austerity measures have been implemented, the number of suicides has increased by 35 percent since 2010.

4. Capture the Erymanthian Boar of Austerity

Tsipras has been told he needs to restructure the country's debt, but the country fears austerity — with an unemployment rate of more than 25 percent.

#UnitedNations: We should treat the matter of the debt as an international challenge. #Greece pic.twitter.com/SSbqhUsmrl

Not a very pleasant task, but Tsipras has to change the way politicians and courts conduct their business from top-down. The first is the adoption of a new code of civil procedure, to speed up court cases to reduce costs — the updated electronic system was supposed to have been adopted in May 2014.

The second, dictated by the Eurozone, is to pass a European Union law, the bank recovery and resolution directive, into Greek national law. This means creditors and shareholders bear the losses of any future bank failures, not tax payers.

Tsipras must kill the ancient ritual of tax avoidance in Greece. The Greek government has lost a total of USD$41.3 (€37.044bn) euros from VAT tax evasion, according to the European Commission and has a 34 percent tax evasion rate — double the average of any other EU country.

Capture the Dreams of the Cretan Bully boys (And girls) of Brussels, who are still roaming and breathing down Tsipras' neck, making sure that debt restructure programs are put in place and carried out.

8. Tame the Mares of Diomedes

Tsipras can't let the horses run amok and must tame relations with Turkey and Cyprus.

9. Take the Girdle of the Amazon Queen Hippolyte

The PM must also show refugees and migrant's kindness and generosity like the Amazon Queen Hippolyte who gave Heracles her belt.

10. Capture the Cattle of Geryon

As for the capturing more cattle, Tsipras has been told Greece needs to beef up its contacts with Turkey to tackle the refugee crisis on their shores.

11. Take the Golden Apples of the Hesperides

Well, Tsipras has already done that having secured USD$96 billion in bailout cash from Greece's creditors — the Troika.

© AP Photo / Thanassis Stavrakis
A pedestrian passes graffiti referring to the officials from the European Union, European Central Bank and International Monetary Fund, together known as the troika, in Athens, Wednesday, July 29, 2015.

12. Capture Cerberus — the Dog of the Underworld

…Underdog more like, Greece has been seen by some as the European Union's austerity experiment.

The 12 labors of Tsipras might be on a Herculean scale, but he now carries the weight of the EU austerity experiment on his shoulders like Atlas.