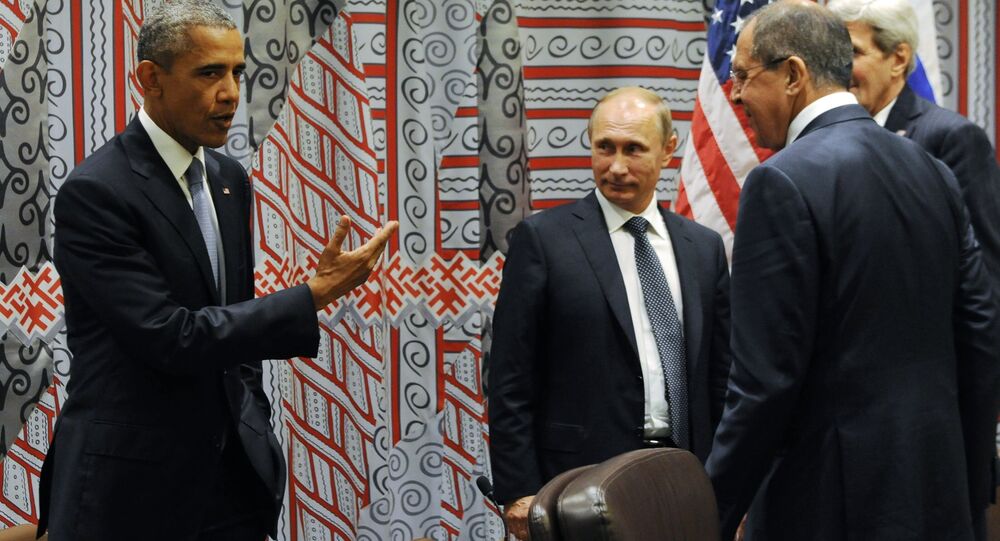 The US and its allies have been plunged into turmoil over Syria after Russian President Vladimir Putin used his speech to the United Nations General Assembly to call for a coalition of forces to back President Bashar al-Assad against ISIL.

Western interventions in the Middle East and North Africa over more than a decade have left much of the region in crisis, with millions of people being displaced and causing the biggest refugee crisis in a lifetime.

In Syria, after years of attempting to depose President Assad, the West is now having to face up to the fact that the only credible solution is to accept Putin’s offer to join a coalition in backing Assad in his fight against ISIL.

In his speech to the UN General Assembly, Putin pointed up one of the founding principles of the UN – the right of states to self-determination, giving legitimate governments and its citizens the legitimacy to defend themselves. He said:

"Power vacuum in some countries in the Middle East and Northern Africa obviously resulted in the emergence of areas of anarchy, which were quickly filled with extremists and terrorists. The so-called Islamic State has tens of thousands of militants fighting for it, including former Iraqi soldiers who were left on the street after the 2003 invasion."

"Many recruits come from Libya whose statehood was destroyed as a result of a gross violation of UN Security Council Resolution 1973. And now radical groups are joined by members of the so-called 'moderate' Syrian opposition backed by the West. They get weapons and training, and then they defect and join the so-called Islamic State," said Putin.

© AP Photo / Yves Herman
West Looks to Russia to Atone for Failed Policy Over Syria
The "power vacuum" was created when the US – together with the United Kingdom, Australia and Poland – invaded Iraq in order to depose the regime of Saddam Hussein, in order to – in the words of George W Bush – "disarm Iraq of weapons of mass destruction, to end Saddam Hussein's support for terrorism, and to free the Iraqi people".

However, the invasion followed extensive talks in the United Nations and critics have said there was no mandate for the invasion. In an interview with the BBC, former UN Secretary-General Kofi Annan said: "From our point of view and from the Charter point of view [the war] was illegal".

The legitimacy of the war has been the cause of constant argument, with Britain’s former Prime Minister Tony Blair being accused of war crimes. Whatever the legitimacy, the invasion left Iraq without Saddam Hussein, but in civil turmoil.

In Syria, the US and its allies similarly sought to bring down the government of Assad and – in 2013 – were about to begin a bombing campaign against his forces, following reports that he had used chemical weapons against opposition forces. However, Putin said it was "ludicrous" that Assad would use them at a time when his forces were gaining ground against the rebels.

However, US foreign policy dictated that it support forces opposed to Assad’s government. Professor Rodrigue Tremblay, from the Center for Research of Globalization said:

"The Obama administration has been openly violating international law in actively supporting and arming a rebellious insurrection and a civil war against the established Assad government. On the other hand, the same administration seems to consider the Sunni-dominated and foreign-supported terrorist Islamic State organization (ISIL) opposed to Assad as illegitimate, and declares to want to 'degrade and destroy' it through bombings."

© AFP 2020 / DON EMMERT
In Brief: Putin's Address to the United Nations in 10 Quotes
Similarly in Libya, where the West was opposed to Muammar Gaddafi, the US, together with the UK, France and Canada, used Tomahawk cruise missiles and airstrikes to topple his regime – an intervention not proscribed in the UN mandate which called for "an immediate ceasefire in Libya … a ban on all flights in the country's airspace – a no-fly zone – and tightened sanctions on the Gaddafi regime and its supporters".

The West is now stuck between a rock and a hard place after President Putin made it clear that supporting the legitimate government of Syria in the fight against ISIL is the only credible course of action in the wake of previous failed interventions in the region by the US-led western allies.

West Looks to Russia to Atone for Failed Policy Over Syria