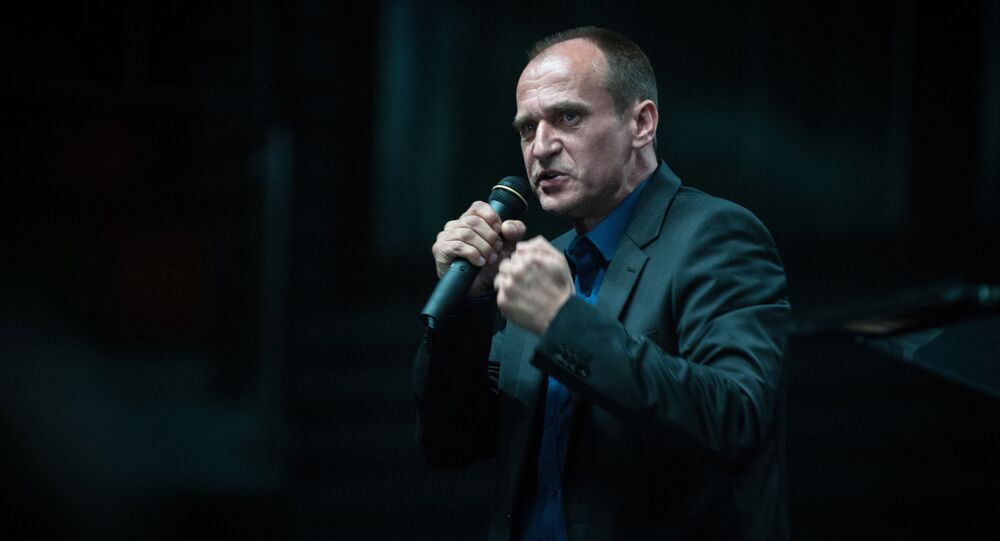 Pawel Kukiz, punk rocker, ex-presidential candidate and upstart politician, has again rocked the Polish political establishment, slamming the government's decision to accept the EU's refugee quotas, and suggesting that most refugees are in fact male "peasants," "healthy as bulls," who have abandoned their families.

© AFP 2020 / WOJTEK RADWANSKI
Polish Manchurian Candidate: President in Trouble Over Secretive Visit With Ex-PM
Kukiz, leader of the newly created Kukiz's Movement political party, exploded onto Poland's political scene in May, during presidential elections where the rocker won 21 percent of the vote with a populist, anti-establishment campaign that boxed many of the country's traditional parties into the low single digits, and even gave Poland's two main conservative parties a run for their money.

In an interview with Polish news channel TVN24 on Monday, Kukiz suggested that Europe's immigration policy is broken, and that "if we continue to conduct such a policy toward refugees, more and more children will wash up on the beach."

He stressed that while "everything must be done to avoid the deaths of women and children," the majority of the people coming to Europe actually appear to be "peasant" men, "healthy as bulls," who "smile as they jump out of the boat," adding "I have seen such pictures."

© AP Photo / Czarek Sokolowski
Poland to Host Refugees in Camps on Russian Border
With Europe struggling with a refugee crisis of an unprecedented scale, European leaders have been holding emergency summits to come up with ways to resolve the issue, including the creation of quotas to share the hundreds of thousands of migrants from the Middle East and North Africa who have come to Europe fleeing war, instability and poverty.

Kukiz suggested that Poland's adherence to Brussels' policy will only encourage more refugees to make the often-hazardous journey, resulting in more tragedies and deaths.

The leader of Kukiz Movement, which will be participating in Poland's parliamentary elections next month, also voiced his skepticism about the government's promise that a verification program will allow authorities to separate genuine refugees fleeing war and danger from so-called economic migrants and terrorists.

"How are the authorities going to verify who is a political refugee and who is an immigrant here to make a living? It took police took four whole days to chase down a crook from Wolowa who escaped from prison, hit a priest with the handle of a shovel, and roamed freely about Poland. And they want us to believe that they will be able to verify who is and is not a terrorist? How? Our state exists only in theory."

Last week, Polish authorities voted to accept an EU-mandated quota system aimed at distributing 120,000 migrants from countries struggling to deal with the wave of immigration. Warsaw plans to set up refugee camps in northern Poland, not far from the Russian exclave of Kaliningrad. About 7,000 asylum seekers will be moved to Poland under the scheme.

Speaking to TVN24 about the upcoming parliamentary elections, Kukiz promised that for his part, if his startup party makes it into parliament, he would "do everything to bring about a change to Poland's constitution – for people to be given a real measure of control over authorities." These measures, which stand as the basis of his party's campaign, include amending the country's electoral laws to create a system of single-member constituencies, abolishing thresholds on referendums, granting more powers to the presidency, and thoroughly reforming the judiciary and the system of prosecutor's offices.

© Flickr / Manolo Gómez
Polish Hospitality? Majority of Poles Now Oppose Accepting Refugees
Last week, Kukiz's party ruffled feathers when one of the movement's candidates proposed granting Polish passports to ethnic Poles living in western Ukrainian territories formerly belonging to Poland. Rafal Otoka-Frackiewicz voiced his concern over the fact that Warsaw had agreed to take in thousands of Middle Eastern and African immigrants while ethnic Poles living abroad do not even have the chance to obtain Polish citizenship. The candidate pointed to the experience of Germany and Israel, countries which have an open door policy for their diaspora abroad.

Next month, Poland will hold elections for both its upper and lower houses of parliament. The conservative incumbent Civic Platform and ultra-conservative nationalist Law and Justice are expected to split a majority between them, although Kukiz's Movement may prove to be a wildcard which will have to be accounted for if neither of the big establishment parties is able to gain an outright majority.

Polish Manchurian Candidate: President in Trouble Over Visit With Ex-PM

Poland to Host Refugees in Camps on Russian Border