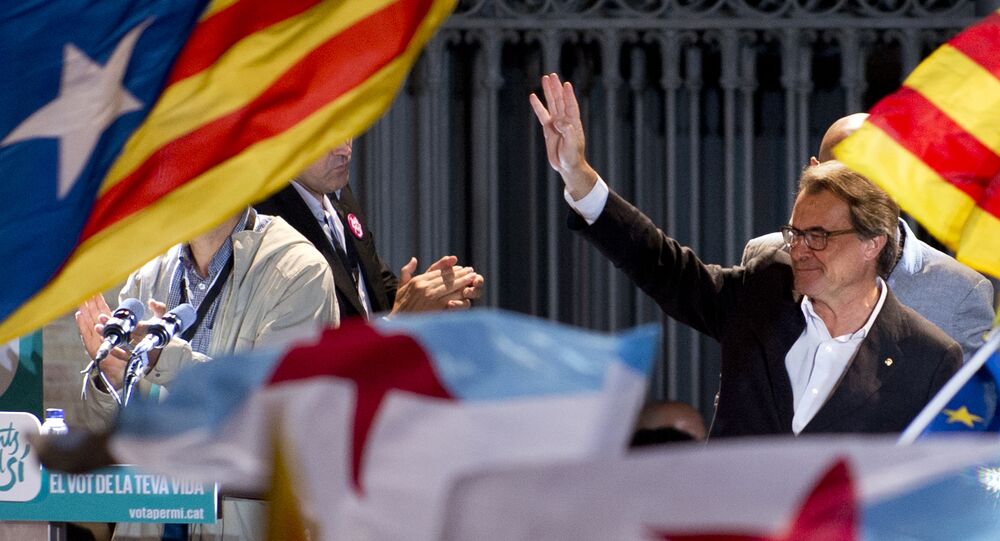 Pro-independence parties are celebrating in Catalonia after winning an absolute majority in regional elections. Crowds are chanting "invincible, invincible" and dancing in the streets, expressing their desire for independence, while EU leaders play down the potential for a Catalexit.

The main pro-independence party, the Junts per Si won 72 seats and the smaller nationalist CUP party won 10 seats in the regional parliament. The party leaders will now proceed with their promise to create an independent Catalan state.

"We have won", regional President Artus Mas told his supporters who has vowed to separate from Spain within 18 months. But only 47 percent of the votes were cast for pro-independence parties, suggesting a future referendum may not automatically lead to victory.

Madrid's conservative government has vowed to reject any push for independence and has ordered an urgent reform of Spain's constitutional court to stop any future moves for a breakaway state. But the results don't just threaten to rock Spanish unity — but its relationship with the European Union.

Germany has instantly reacted to regional elections calling for the country to respect EU treaties, but the citizens of Catalonia may well be able to have their Catalan cake and eat it.

There is no plan in place for what happens when an EU member state splits apart. If Catalonia breaks away from Spain, the state would automatically be excluded from the EU and the euro.

However, Spain's constitution says that citizens "living abroad" can keep their Spanish passports. So, even without being a member of the EU, citizens of a new Republic of Catalonia would keep their EU citizenship.

© AP Photo / Alvaro Barrientos
A pro-independence Basque puts a sticker on a T-shirt which reads, ''Yes for the Independence'', during a march to support the pro-independence Catalonia movement, in Pamplona, northern Spain, Saturday, Sept. 11, 2015

Catalonia, which produces 20 percent of Spain's gross domestic product, is an economically healthy region and Barcelona and Madrid aren't keen on losing it. And neither is Brussels.

Another potential split in the Eurozone is another headache for the European Commission, which has only just finalized bailout talks with Greece, avoiding a Grexit, and faces more rounds of reform discussions with Britain keen to reform its relationship with the EU, paving the way for a potential Brexit.

.@SeanCroweTD has welcomed the results of the regional elections in Catalonia & the mandate for Catalan independence pic.twitter.com/0aak7kSC9X

Not to mention the refugee crisis which has split political opinion in almost every member state and led to walls and fences being built across an "open Europe".

"The EC, in principle, does not comment on regional elections, [it is] an internal matter for Spain."

"[It's] not for the Commission to express a position on a matter of internal organization related to the constitutional provisions of a member state."

The EU maybe be playing down their interest in regional elections — but as momentum gathers in "invincible" Catalonia, the Commission won't be able to ignore a Catalexit, and the potential economic fallout for Spain — and the Eurozone.