A senior UN official has condemned France and Britain's "shameful" failure to improve the conditions of people living in makeshift camps in the French town of Calais, calling for a permanent processing centre to be built to assist those trying to claim asylum in the UK.

Peter Sutherland, the UN's special representative on migration, said he was "sickened" and "horrified" after recently visiting the camps in the French port town, known as 'the jungle'. 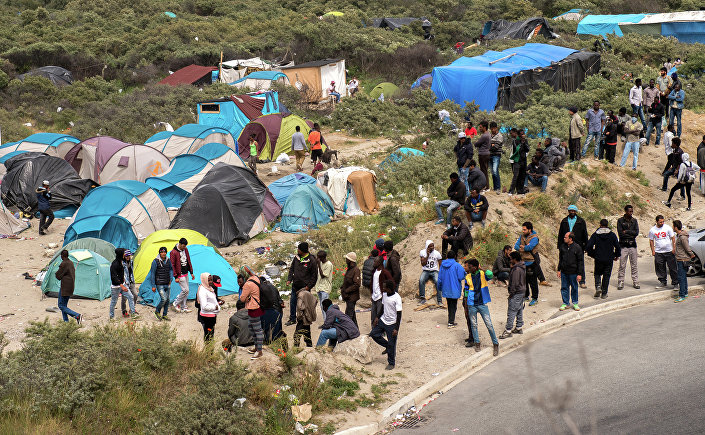 © AFP 2019 / PHILIPPE HUGUEN
Migrants stand next to tents in the "New Jungle" in Calais on June 17, 2015 near the ferry port of Calais, northern France

"The Camp in Calais is a truly dreadful place. It is an indictment of society that it exists. Why have the media largely moved on?," he said on Twitter, before calling on both France and Britain to work together to improve the situation for those living there.

"You would think both governments would work together to solve this — after all, it is only 3,000 people, it should not be above redemption."

"It would require a politician to be totally insensate to see the Calais camp and not to be moved by it. But they have done nothing."

Calls for a Permanent Processing Center

Approximately 3,000 people live in makeshift camps near the port of Calais, in the hope of finding their way to Britain.

I cannot easily recover from the shock of Calais.the French and British governments should rapidly respond to the horrible conditions.

The UK has maintained a tough immigration stance for refugees in Calais, arguing that allowing people into Britain would merely encourage more from the Middle East and Africa to make the dangerous voyage to Europe.

Critics have taken aim at the UK for not offering any legal avenues for people looking to enter the country, with more than a dozen people dying as a result of trying to smuggle their way into Britain in the back of trucks or through the Channel train tunnel.

Opponents of London's hardline immigration stance have also argued that not allowing legitimate paths for people to enter the UK has facilitated the growth of human trafficking and people smuggling syndicates in French port towns.

Coming home from the jungle in calais. Most animals have basic needs met better than these incredible people. #Enough pic.twitter.com/0Aq2oA8RHC

The same argument has been applied to the EU as a whole, with Brussels' inability to negotiate a coherent immigration policy between member states, seen as a driving factor influencing many people's decision to cross the Mediterranean Sea.

In order to identify genuine refugees from others in camps such as those at Calais, Sutherland called for a permanent processing facility to be established in the town, which would help those seeking asylum in the UK process their claims.

"Together with stopping irregular migration, new avenues for legal migration should be opened," he said.

"You could set up an immediate system for assessing how many of these people are refugees. You could do it in a very short time and you could do it as a joint responsibility," he was quoted as saying by the Guardian.

"Many of the migrants I met in Calais were not merely refugees entitled to asylum, they wished to join family members in the UK."

Sutherland once again took aim at French and British authorities, following the UK's announcement that it will take in 20,000 Syrian refugees over the next five years, arguing that the commitment is incredibly small compared to the overall problems.

"[The UN and other agencies] are inundated with what they are trying to do in the countries that are taking millions of refugees, and here [in Calais] we have 3,000 people in what one might describe as two of the wealthiest countries in the world and they are just being left there. It is just shameful."

He also dismissed the view that offering an improvement of services to those in Calais would merely encourage more refugees to the area.

"It is sickening that people are using that as an excuse to leave people living in absolute squalor."

"This is not about how this situation fits into the overall mosaic of the arguments relating to immigration, this is just a violation of the rights of individuals of an utterly appalling kind and we can not allow it to go on."