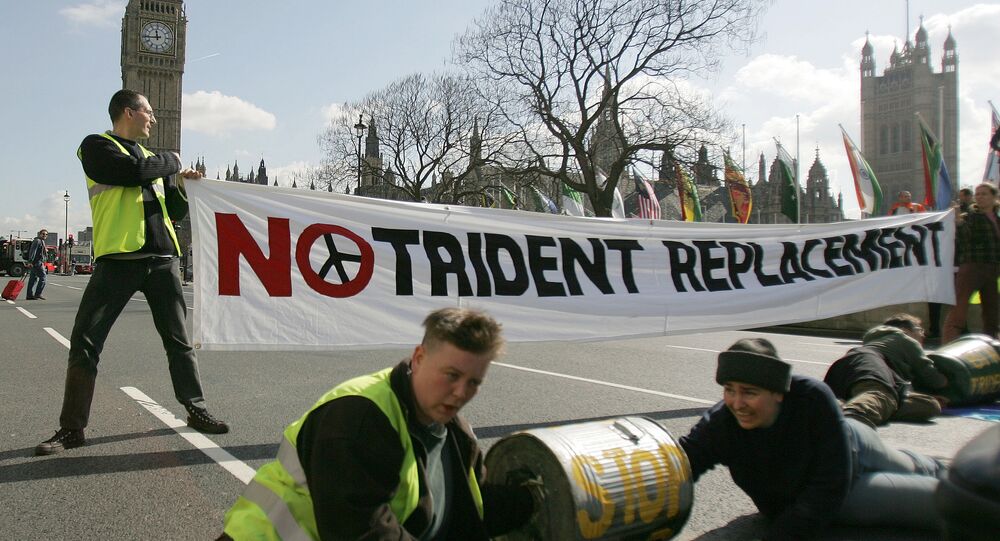 Anti-nuclear campaigners have told Sputnik they will fight on after the leader of the UK Labour Party, Jeremy Corbyn, lost his battle to force a vote over Britain's replacement of its strategic nuclear deterrent, Trident.

Corbyn has been a life-long opponent of nuclear weapons and is a vice chair of the Campaign for Nuclear Disarmament (CND) and chair of the CND Parliamentary group.

Having become the leader of the Labour Party in circumstances which have pitted him against the majority of his own parliamentary colleagues, Corbyn was keen to open up a debate on the potential non-replacement of the UK's nuclear deterrent, Trident, during its annual conference, taking place this week.

However, in a pre-conference vote on the agenda, Corbyn was defeated, with only 0.16 percent of the trade union vote and 7.1 percent of the constituency Labour parties voting in favor of the subject being put to debate.

This will come as another blow to left-winger Corbyn, who has already been forced to back-track on many of the policies he pursued in over 30 years on the back benches.

Speaking from the Labour Party conference in Brighton, on the south coast of England, Ian Chamberlain, CND spokesman, told Sputnik: "Jeremy himself will be very disappointed. He's campaigned on nuclear weapons for over 30 years…

"It's going to cause him [Corbyn] some difficulties, but I think there are ways out of this. As long as all those people who gave Jeremy that enormous mandate in the Labour Party leadership election continue to mobilize and raise the issue, I think the possibility for the Labour Party to change its position remains."

Britain is debating whether or not to replace its ageing fleet of Vanguard-class submarines, which carry Trident II D-5 ballistic missiles. Both David Cameron's Conservative Party and the Labour Party have been committed to maintaining Continuous-at-sea Deterrent, with new submarines.

The nuclear deterrent is based in western Scotland at Her Majesty's Naval Base Clyde. The submarines are based at Faslane and the warheads are stored at the Royal Naval Armaments Depot, Coulport. Warheads are transported to the Atomic Weapons Establishment at Aldermaston, Berkshire for overhaul.

However, Corbyn is at odds with many of his parliamentary colleagues and had hoped that the annual conference could be used to re-open the debate with Labour to try and bring about policy change. He was keen to support the Scottish National Party in their opposition to Trident.

Cunningham admitted to Sputnik that the task would be an uphill battle for the Labour leader.

"I think it makes it difficult for Jeremy. Scrapping Trident was one of his flagship policies and something that he raised at all of the debates and rallies that were conducted for his campaign. So people voted for Jeremy on that basis."

© AFP 2020 / MAURICE MCDONALD
UK Royal Navy Detained After Blowing Whistle on Trident Nuclear Safety
"There's a real sea-change of opinion on the ground, so I think if we continue to mobilize and to raise [the issues of] Trident, in partnership with Jeremy, I do hope that there will be an opportunity — maybe via an emergency conference — to change Labour Party policy," Cunningham told Sputnik.

The fact that Corbyn has been outvoted on the massively important issue of Trident by a majority at his own party's annual conference so early on in his leadership is a further sign of deep divisions within Labour, which Corbyn will struggle to heal.