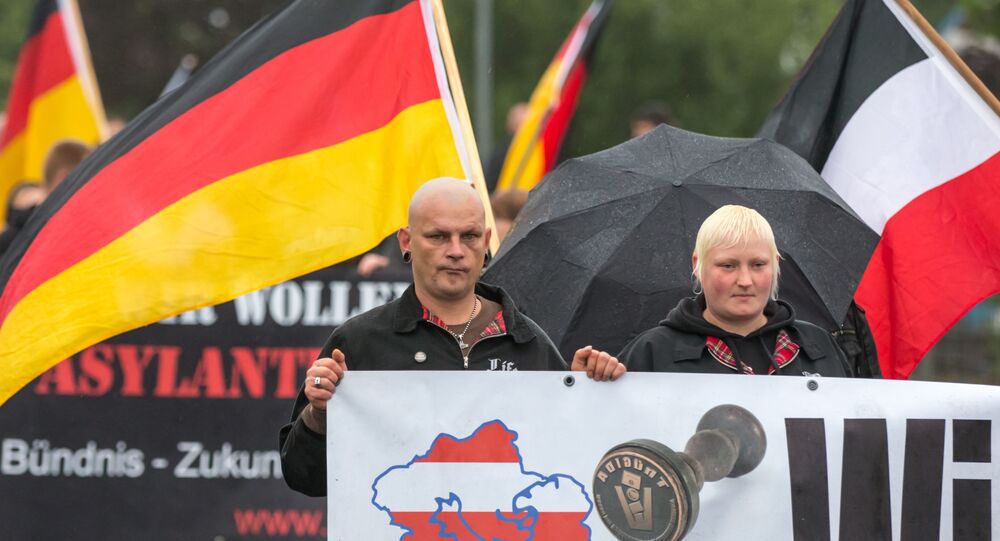 Clashes with extremists are expected to hit Germany amid the ongoing refugee crisis, as the right-wing movement is gaining momentum.

Germany's domestic intelligence head foresees aggravation of radical groups as refugees continue to enter the country prompting right-wing groups to carry out nationalist and extremist demonstrations across the city.

Hans-Georg Maassen from the Federal Office for the Protection of the Constitution revealed in an interview with Deutschlandfunk public radio on Sunday that "what we're seeing in connection with the refugee crisis is a mobilisation on the street of right-wing extremists, but also of some left-wing extremists" who oppose them.

He noted that his office has recently seen a "radicalisation" and "a greater willingness to use violence" by all extremist groups, the far right, the anti-fascist far-left and Islamists, who were united in their fight against the massive influx of asylum seekers from MENA.

© REUTERS / Axel Schmidt
German Mayor Receives Violent Threats After Opening Refugee Shelter
The Maassen's speech was due to the recent xenophobic movements by the right-wing extremists mostly in the former communist eastern part of Germany while officials have expressed concern over neo-Nazi networks that might be spreading across the country.

About 100 migrants have been transported by police on two buses to a shelter in the town of Niederau on Saturday night, following the xenophobic rallies by the right-wing groups, which broke out since Friday in Saxony.

Anti-refugee rallies the eastern state of Mecklenburg-Western Pomerania towns on Friday gathered more than 1,000 people, resulted in three casualties in clashes with counter-protesters.

In the eastern city of Leipzig, the right-wing rally "Offensive for Germany", organised by local anti-Islam activists with about 400 marchers, sparked a larger counter-protest that police said drew more than 1,000 activists.

The same number of anti-Islam protesters have recently organised the right-wing movement "Offensive for Germany" with around 400 marchers in Leipzig, situated in the eastern part of the country.

Rocks and fireworks have been commonly used by activists in the streets in eastern Germany whereas in the western city of Bremen some extremists tried to set fire to tents housing refugees since last October.

Maassen stated that, so far, 22 arson attacks against would-be or existing refugee shelters have been implemented.

"Our hearts are wide open, but our capabilities are finite," Gauck said, according to the pre-released text of a speech he was to give in the western city of Mainz.

"Given the rapid influx," he said, the government must now "promote the construction of apartments and build schools, hire teachers and kindergarten staff, adjust the labour market and vocational training, teach the German language and German law — and do all of that at the same time".

Protests in Germany have revealed a less-than-accommodating attitude towards migrants which will likely lead to the spread of extremism. Especially, local low income residents may not be quite enthusiastic about covering the steadily increasing costs for "unwelcomed" newcomers.