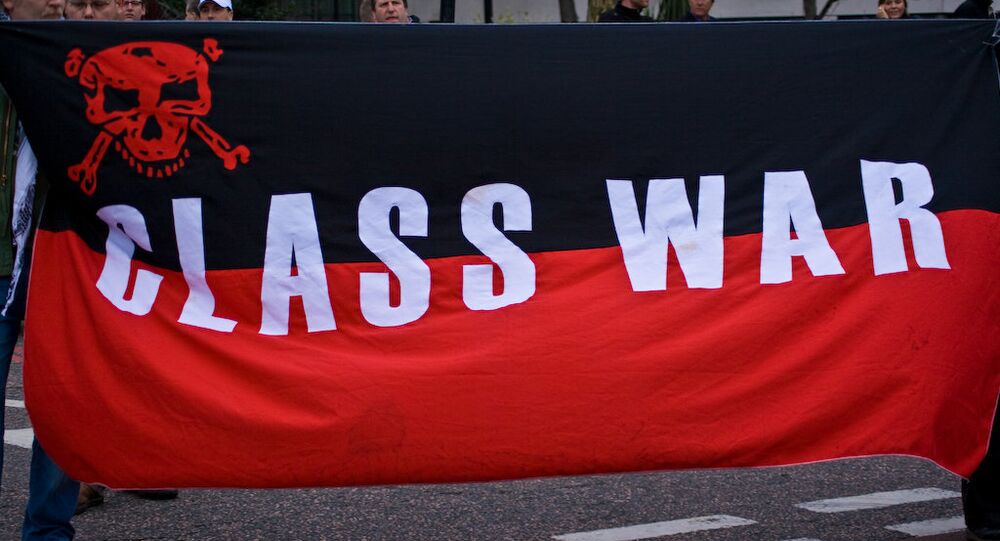 The ex-finance minister for Greece has told British media that the UK's austerity program is a cover-up for class war against the poor.

© Flickr / EmsiProduction
From Austerity to Insanity: What’s in Store for Greece
Yanis Varoufakis, who compared Greece's creditors, the Troika, to terrorists, stood down after receiving pressure from European leaders during bailout negotiations in July, as the Greek government committed the country to more austerity — despite the people voting against it.

But the economics professor has remained far from quiet.

Appearing on Question Time in the UK, Varoufakis said: "The problem is that austerity is being used as a narrative to conduct class war."

"To be talking about reducing the state further when effectively what you are doing is reducing taxes, like inheritance tax, and at the same time you are cutting benefits — that is class war."

Mr Varoufakis said: "I think it’s wonderful Labour has undergone this transition, similar to the Tories under Thatcher".

Yanis Varoufakis is spot on with Thatcher comparison. Corbyn is the first signpost politician since her, though facing the other way. #bbcqt

Britain's chancellor George Osborne plans to cut approximately $70 billion (£46bn) in social security payments, which includes tax credits and housing benefits over the next five years, amid warnings that it will substantially increase poverty levels and hit society's vulnerable people the hardest.

At the same time, public sector workers, like nurses and teachers have been limited to a one percent pay freeze. And for children seeking asylum in Britain, the daily allowance to buy food and clothes is being reduced from $11.71 (£7.50) to $8.12 (£5.20) a day.

"These shameful cuts will plunge children further into poverty and could cause even more unnecessary hunger, ill health and anxiety for some of the most vulnerable families in Britain."

So far, the Conservative government has cut the top rate of income tax paid by the wealthiest and has pledged to cap inheritance tax for people living in houses worth up to $1.5 million (£1 million).

And Varoufakis isn't the only one who thinks austerity is a narrative for class war.

Echoing the former Greek finance minister was Lord Turnbull, former head of the civil service, who told the economic affairs committee deficit reduction was a "smokescreen" for the government to attack the state. Speaking to UK Chancellor George Osborne, he said:

"The idea that this debt is impoverishing people is I think an economic fallacy."

But George Osborne thinks that reducing public debt would give Britain a better chance to weather a future financial crisis.

It seems, however, that the simultaneous reductions on taxes for the wealthy and cuts to welfare state spending haven't been missed by the anti-austerity economics professor and former Greek finance minister, who is more than interested in what is happening in Britain now.

British Exit From EU Looms as Divisions Deepen in Europe