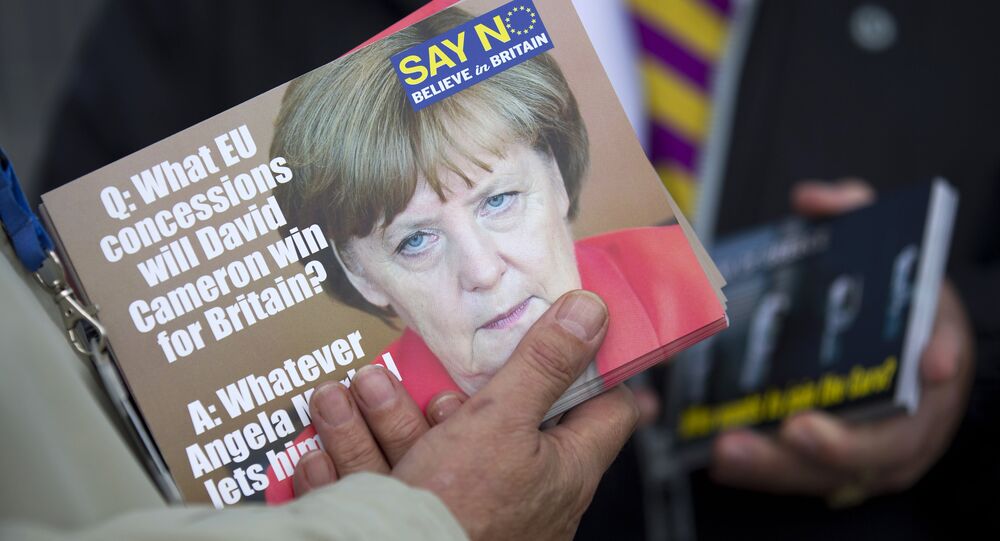 British Exit From EU Looms as Divisions Deepen in Europe

A British exit from the European Union is becoming more likely as deep divisions grow within Europe over the refugee crisis, which has thrown one of the central principles of the union into disarray and the crisis within the Eurozone.

As delegates of the anti-EU party UKIP gather in Doncaster, in the north of England, for their annual conference, there is growing evidence that the current crises in Europe are making a British exit from the EU more and more likely.

"The risks of staying in this Union are far greater than the risks of leaving" — @Nigel_Farage #UKIP15 pic.twitter.com/A4wo1FZcd0

UK Prime Minister David Cameron has promised to renegotiate Britain's ties with the bloc ahead of the vote. He has said he is confident of being able to recommend Britain stays, but rules nothing out if he cannot get the changes he wants.

The "Out" umbrella campaign, branded 'Leave.EU', has been set up by businessman Arron Banks, a financial backer to UKIP, and property investor Richard Tice. The group, which Banks said already had 150,000 supporters, will be formally launched in Doncaster, Friday.

© Flickr / Christopher Elison
In, Out or On the Fence: Where UK Politicians Stand in Brexit Debate

Most opinion polls show Britons back staying in the EU, but there are some indications that perceptions could be shifting in response to the refugee crisis. One poll earlier this month showed a narrow majority in favor of leaving.

Anti-EU campaigners are pointing to the two major crises within Europe which have divided the union and rocked the fundamental pillars of its foundation: the refugee crisis and the Eurozone crisis.

The refugee and migrant crisis has exposed the flaws of the Schengen agreement on open borders. When it was envisaged, it was set to underline the fundamental principle of the European Union: the freedom of movement of people. All internal borders would be opened and people would be free to wander through the Schengen area without hindrance. Importantly, the UK (together with Ireland) is not part of Schengen.

The influx of asylum seekers flooding across Europe and through France to get into Britain has caused chaos in Calais and on the Channel Tunnel rail route, with thousands attempting to cross and having set up camps on the French side over the past few years.

With the massive swelling in the number of refugees and migrants flooding into Europe, many in the UK say this is evidence of the wisdom to stay out of Schengen and to remain apart from the main EU bloc.

The asylum seeker crisis within Europe has caused deep divisions, with arguments over why its outer borders were so easily breached by tens of thousands and why the rules of the Schengen Agreement have been suspended in some countries and not in others. The crisis caused Donald Tusk, President of the European Council to warn:

"It doesn't make any sense to even speak about common migration policy. What is at stake is also the future of Schengen, the sense of order in Europe and the common European spirit."

Meanwhile, the Greek bailout crisis has exposed another deep flaw within the Eurozone — of which the UK is, again, not a member. The sovereign debt crisis that began with the global financial crash in 2008/9 led to Ireland, Spain, Portugal and Greece needing bailouts within the Eurozone.

Had each country retained its own currency, devaluation would have been one tool capable of resolving their financial problems. Without that option, each had to be bailed out by the other member states.

In the case of Greece, this has happened three times and the austerity package imposed by its creditors is causing deep divisions — if not pain — within the country.

The issue has exposed the fundamental flaw with the single currency: for it to work, there needs to be a common fiscal policy including, among others, a common tax and pensions framework. This is politically anathema to many. There are now calls for the famous "ever closer union" of Europe's economies to save the euro. This is a complete no-no in Britain.

As the 'Leave.EU' campaign is launched Friday, many in Britain will be asking: why remain a member of a European Union that is already tearing itself apart and flouting the very principle on which is was founded?