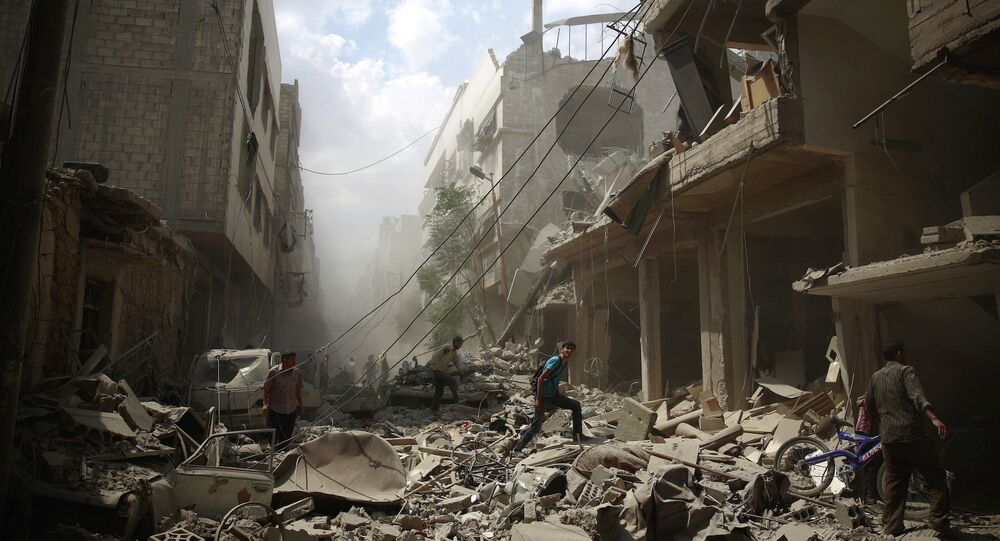 Economic cooperation and trade between Russia and the European Union (EU) may soon come back due to the US-Russia joint efforts to fight ISIL in Syria, Spanish writer and philosopher Agapito Maestre-Sanchez wrote for El Mundo.

If Russia and the EU restart their cooperation, it won't be because of the diplomatic work of EU leaders, but due to Washington and Moscow finally getting along and working together to defeat ISIL in the Middle East, Maestre-Sanchez said.

The Spanish writer said if and when the two superpowers agree on the Syrian issue, it will naturally spill into the re-establishment of Russia-EU economic relations.

Besides the refugee crisis and food embargo, Europe is currently facing an even more important problem — the lack of real leaders, people who could lead the continent through hard times and find working solutions to overcome problems.

© AP Photo / Pool photo via AP
US Ready for 'Immediate Discussions' With Russia on Syria - Kerry
"[Current EU leaders] are doing absolutely nothing, but only talk that they're doing something," Maestre-Sanchez said, adding that Europe is currently having the worst "leadership crisis" in Europe's recent history.

On August 6, 2014, Russia imposed a year-long embargo on food imports from the European Union, the United States and some other Western countries, in response to sanctions imposed against it over the Ukraine crisis. At the time, Russia was the European Union's second-biggest market for food exports.

Copa-Cogeca, an association of European farmers and agri-cooperatives, has estimated that, as of late July 2015, agricultural producers in EU countries have lost 5.5 billion euros as a result of the Russian food embargo.

In June, Russia extended for another year its ban on food imports from the EU, the United States, Canada and Norway.

Europe Can Solve Syrian Refugee Problem Only by Working With US, Russia