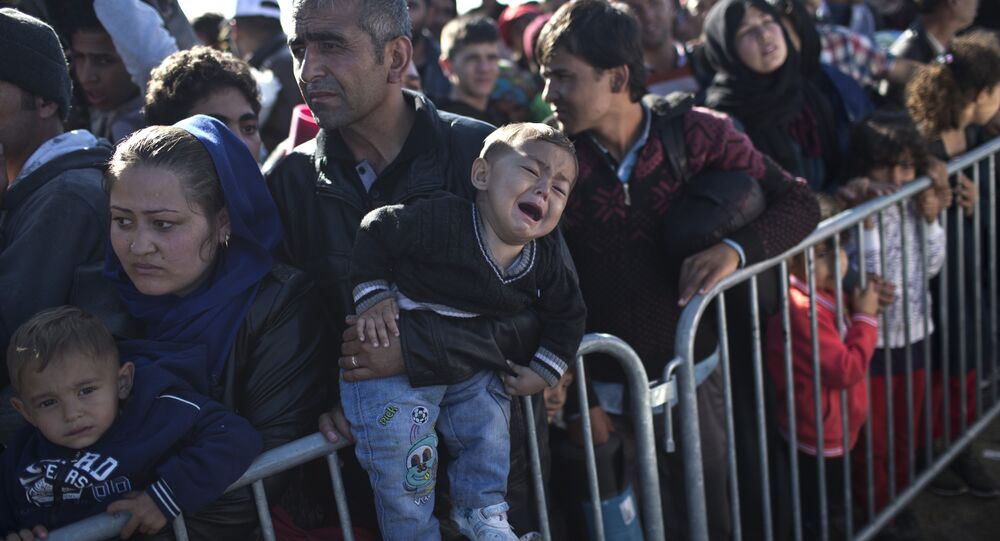 As EU leaders gathered in Brussels for an emergency meeting over the refugee crisis, there was growing resentment at the resettlement plan forced on member states that the UN says is too little too late.

The EU leaders are set to ratify the partial agreement to resettle 120,000 migrants and refugees in a deal that has driven a wedge between member states. The vote, taken by interior ministers, was rejected by the Czech Republic, Hungary, Romania and Slovakia, while Finland abstained. Poland deserted its regional allies and voted for the deal promoted by Germany and France.

© AP Photo / Kerstin Joensson
Refugees wait on a bridge after police stopped them at the border between Austria and Germany in Salzburg, Austria, Thursday, Sept. 17, 2015.

"Compared to earlier in summer, numbers almost doubled" said colleague on Lesvos. "Yesterday we saw 6,000 in one day" http://t.co/4r1esl6yvQ

But the agreement has been met with anger in some member states and the United Nations refugee agency (UNHCR) says the lack of unity and delay has exacerbated the situation.

"This is a crisis of political will combined with lack of European unity that is resulting in management mayhem," said António Guterres, UN High Commissioner for Refugees, in a statement issued today.

"When in 1956, 200,000 Hungarians fled to Austria and Yugoslavia, not only were people properly received, but a relocation program was quickly put into place and 140,000 people were relocated to other countries. What was possible then should be possible now."

'Worst I Have Ever known'

Behind the scenes, there has been much argument over how the crisis should be handled. One senior diplomat told reporters:

"This is the worst I've ever known things in more than 20 years dealing with European affairs."

The UNHCR says the emergency situation currently facing Europe, which has seen 477,906 new sea arrivals this year, is "primarily a refugee crisis". The vast majority of those arriving in Greece and moving onwards come from conflict zones such as Syria, Afghanistan, and Iraq.

"A relocation program alone, at this stage in the crisis, will not be enough to stabilize the situation," UNHCR spokeswoman Melissa Fleming said

"Although I don't like using the quotas, I disagree with them and we voted against them, Europe must not fall apart on the migration crisis."

In a further sign of divisions within Europe, in a press conference arranged for Wednesday, European Commission Vice President Frans Timmermans said it would clamp down on countries which infringed the Schengen Agreement on a borderless Europe. In a further sign, Hungary has erected a razor wire fence, Germany has suspended the Dublin rules – which say migrants arriving in one country must be sent back to the Schengen country in which they first landed – and border patrols have been re-instated in several areas.

Timmermans said the Commission would take action against any countries breaking the agreements on the freedom of movement of people and the common asylum policy – which has still not been agreed among EU member states. "Until now only five member states have properly transposed and implemented the asylum legislation. So we are launching 40 new infringement cases.

"The Dublin system must be applied correctly by everyone. This is one way of restoring confidence in the Schengen area, the other is to strengthen the common management of the shared external borders."

He said there would be a new European border coastguard established by the end of 2015 and more resources for border control agency Frontex.

Federica Mogherini, Vice-President of the European Commission admitted that cuts in funding to agencies running refugee camps in and around Syria had led to the recent increase in people leaving the zone and heading for Europe. She said:

"Why is that NOW the refugees come to Europe? One of the reasons is that the agencies operating on the ground have experienced cuts in funds in the last months."

She announced that the EU would be increasing financial support to relief agencies in an effort to stem the tide of people making for Europe.

Underlining the seriousness of the situation in Europe and acknowledging the differences between the nations, European Commission President Jean-Claude Juncker said:

"In spite of our fragility, our self-perceived weaknesses, today it is Europe that is sought as a place of refuge and exile. This is something to be proud of, though it is not without its challenges."

"The first priority today is and must be addressing the refugee crisis. The decision to relocate 160,000 people from the most affected Member States is a historic first and a genuine, laudable expression of European solidarity.

"It cannot be the end of the story, however. It is time for further, bold, determined and concerted action by the European Union, by its institutions and by all its Member States."