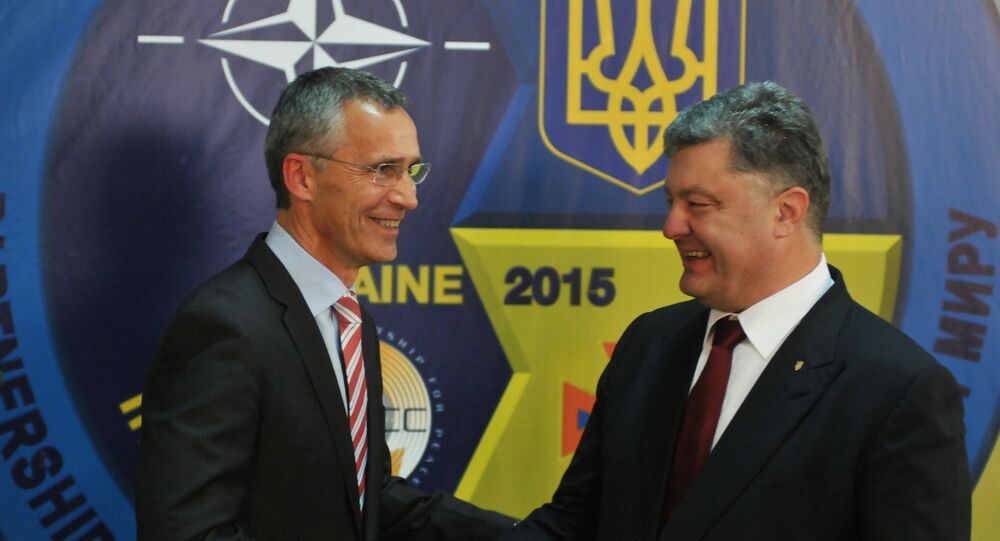 A Donetsk People's Republic's (DPR) negotiator at the Contact Group talks on Ukraine said Tuesday he hoped NATO Secretary General Jens Stoltenberg's visit to Kiev would have no adverse impact on the upcoming round of talks in Minsk.

© AP Photo / Mikhail Palinchak, Pool
Poroshenko, NATO Chief Open Rescuer Exercises in Western Ukraine
MOSCOW (Sputnik) – Later on Tuesday, the Contact Group, comprising representatives from Ukraine, the self-proclaimed people's republics of Donetsk and Luhansk, Russia and the Organization for Security and Co-operation in Europe, and its four subgroups, will hold talks in the capital of Belarus, focusing on local elections in Donbas, among other issues.

"It's not the first visit of high-ranking Western politicians to Ukraine on the eve of Minsk meetings. And every time such a visit makes adjustments to the policy of the Ukrainian government. I would not like to think that this visit will affect negatively the negotiation process," Denis Pushilin was quoted as saying by the Donetsk News Agency.

Members of the Contact Group contributed to hammering out major ceasefire agreements in Ukraine in September 2014 and in February 2015.

The subgroups are currently trying to find a political solution to the armed conflict between Kiev forces and eastern Ukrainian militias that has claimed thousands of lives in Ukraine's east since April 2014.

Stoltenberg is currently on a two-day visit to Ukraine. Speaking at Yavoriv training center in Lviv Region on Monday, he told reporters that if Donbas elections did not comply with Ukrainian legislation, not a single NATO member state would recognize them.