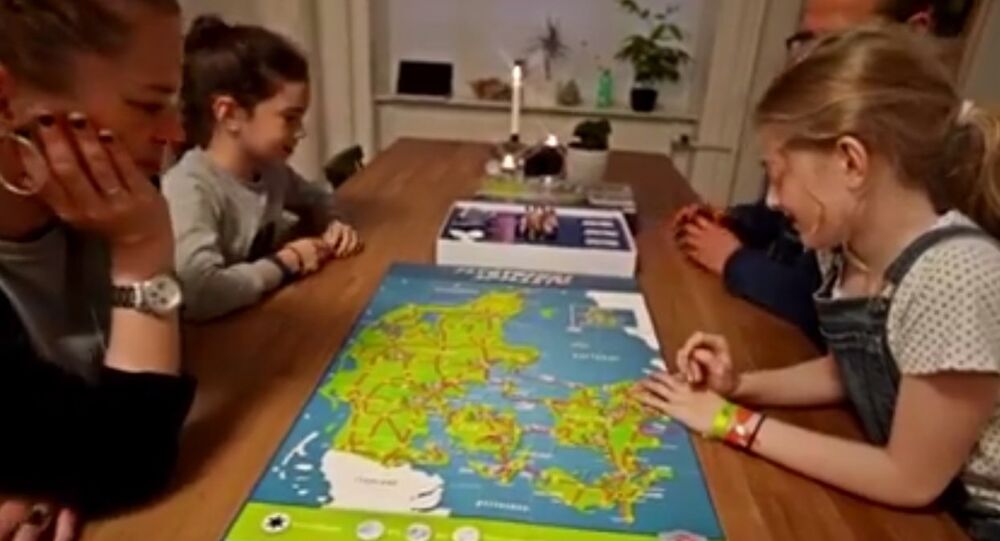 The Danish late night talk show "Natholdet" ("The Night Shift") has posted a suggested trailer of a new board game entitled the “Refugee Game”, which has at least one hard copy. It challenges the players to block migrants as they attempt to enter “happy little Denmark”; and left the audience at a loss: how do you respond to such a teaser?

The trailer features a family of four, two adults and two children, playing the game, trying to block what apparently look like Middle Eastern refugees from entering into their country.

© Photo : Facebook/Natholdet
Screenshot from a suggested trailer of a new board game entitled the “Refugee Game”.

The game has a playground with a map of Denmark and its neighboring countries, a set of cards, blocking fences, a boat with refuges, the figures of refugees (also mostly families with children), and the figures of four Danish politicians.

It, however, remains unclear whether the idea behind the game is sarcasm or criticism of the government in its policy towards the refugee crisis.

The trailer however has followers divided into those who support the game and urge the Danish to think about thier possible future without freedom of speech, and those who have humorlessly denounced its creators as ”shameless monsters”.

Earlier this month, another attempt to re-imagine the refugee crisis as a game made headlines, but it was one where the protagonist was a Syrian refugee attempting to enter Europe. "Super Mario Game asylum stage", a Youtube video featuring a game which is styled after the 80's Nintendo hit Super Mario, features a Syrian protagonist who is attempting to make it to Europe.

However, far from poking fun at the migrant crisis, its designer, a 29-year-old Syrian living in Istanbul, hoped to raise awareness about the plight of his countrymen.

Going by the pseudonym Samir Al-Mufti, explained to the BBC how he came up with the idea. "A lot of my friends have fled for Europe. From talking to them I built a clear idea of what they went through and the life-threatening risks they took."

Although the video has its comedic moments, it was inspired by a personal tragedy: "Five months ago my best friend drowned in the sea while travelling from Ismir (Turkey) to Greece. The engine on the boat exploded. That's when I got the idea for the video," said Al-Mufti.