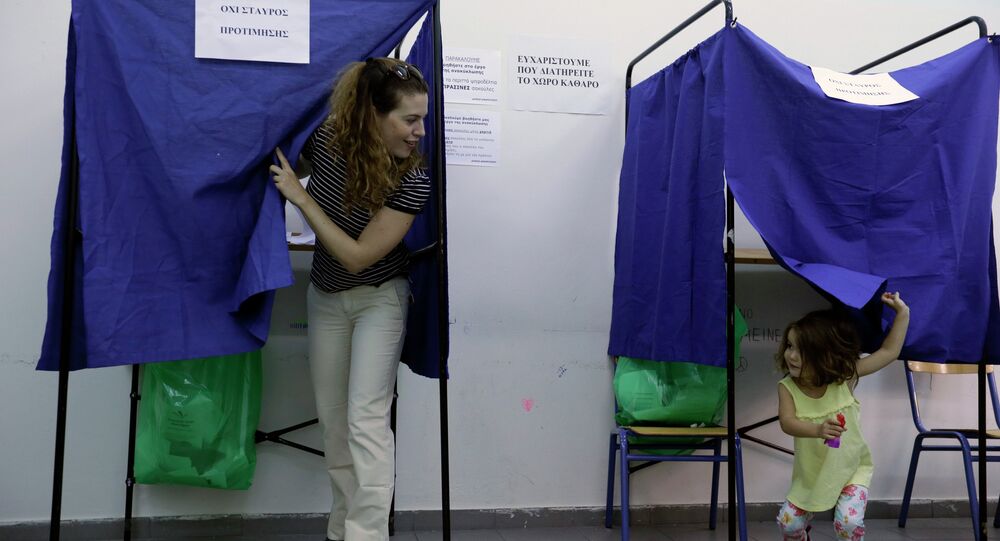 According to media reports, the voter turnout at the snap parliamentary elections in Greece is currently low in comparison to the percentage of voters who cast a ballot during the January elections.

© AP Photo / Lefteris Pitarakis
Greece’s Tsipras Votes at Ballot Station in Center of Athens
ATHENS (Sputnik) – The voter turnout at the snap parliamentary elections in Greece is currently low in comparison to the percentage of voters who cast a ballot during the January elections, local TV channel ERT broadcast Sunday.

Earlier in the day, the snap parliamentary elections kicked off in the country.

According to the channel, there were only 15 ballots in the voting box at 10:00 a.m. local time (07:00 GMT) at the ballot station in the second largest city of Crete, Chania, where Greek President Prokopis Pavlopoluos voted.

After voting, Dimitris Koutsoumbas, the general secretary of the Greek Communist Party, noted that people still had to pay for toll roads in the country on Sunday although they had to be free at least on the day of elections. The issue was raised as the Greek government opened the toll roads for free passing of the citizens in order to stimulate the voting turnout during the July bailout referendum.

Greek people are eligible to vote only in the region they are registered in, while the payment to reach the ballot station sometimes reaches 25 euros ($28), the broadcaster reported.

According to the ERT channel, the first official estimate of the voting results will be available at about 9:30 p.m. (18:30 GMT), when 10 percent of the votes would be counted.

This time, Greece's 13 regions will send the results of the voting electronically, which will help to speed up data processing.

The voting in the country is carried out without any breaches of public order, the broadcaster concluded.

Greeks Unwilling to ‘Stand on Knees’ Before Germany Despite Debt Issue