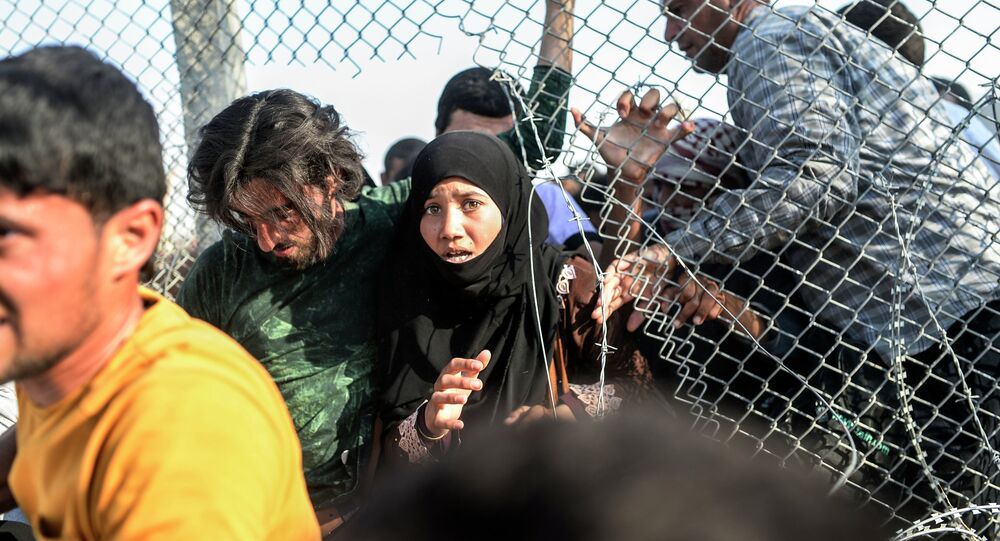 Hungary must shut the borders down in order to prevent ISIL militants from getting to the EU with the migrant flow, a member of the Hungarian delegation to the fall session of the Organization for Security and Co-Operation in Europe Parliamentary Assembly (OSCE PA) told Sputnik.

© REUTERS / Stringer
German Official Bashes Hungary’s 'Unacceptable' Treatment of Migrants
ULAN BATOR (Sputnik), Svetlana Alexandrova – Border closure could be the right strategy in dealing with the EU migrant crisis as it would prevent an excessive inflow of economic migrants and protect European residents from terrorism, Bana Tibor, a member of the Hungarian delegation to the fall session of the Organization for Security and Co-Operation in Europe Parliamentary Assembly (OSCE PA) told Sputnik.

"Jobbik party [Movement for a Better Hungary] has supported some governmental decisions in regards to protecting our boarders but these steps are not enough," Tibor, who is a Hungarian MP with the Jobbik party said, stressing that "We need to take a united decision within the EU that economic migrants have to go back to the countries of their origin as near 80 percent of those who arrive are economic migrants and not qualified for asylum status."

Tibor warned that open borders could facilitate terrorists’ entry into the European Union, as radicals take advantage of the large chaotic inflow of migrants from the Middle East.

"Hungary needs to close its boarders completely to protect our citizens from terrorism and extremism that can infiltrate into the Schengen boarder with the migrant flow. Some of those who arrive to Europe reportedly have a connection with the Islamic State [ISIL]," Tibor told Sputnik.

The European Union is currently struggling with a large-scale refugee crisis, as hundreds of thousands of asylum seekers from crisis-torn countries in the Middle East, including Syria, which is fighting against IS radicals, seek a safe haven in Europe.

© AP Photo / Alexander Zemlianichenko
US Senator: US, Russia Bear Responsibility to Resettle More Syrian Refugees
More than 500,000 migrants have arrived at the EU borers or have crossed into the bloc in 2015, according to European Commission President Jean-Claude Juncker.

Hungary is being used as a gateway to wealthier EU states by thousands of undocumented migrants. Budapest estimates that over 190,000 migrants have illegally crossed the country’s borders so far in 2015.

Thousands of migrants gathered in the Serbian border area as the new Hungarian legislation introducing prison terms for crossing the border illegally came into force on Tuesday.

On Wednesday, Hungarian police used force as refugees tried to enter Hungary and to break down the fence between Hungary and Serbia.