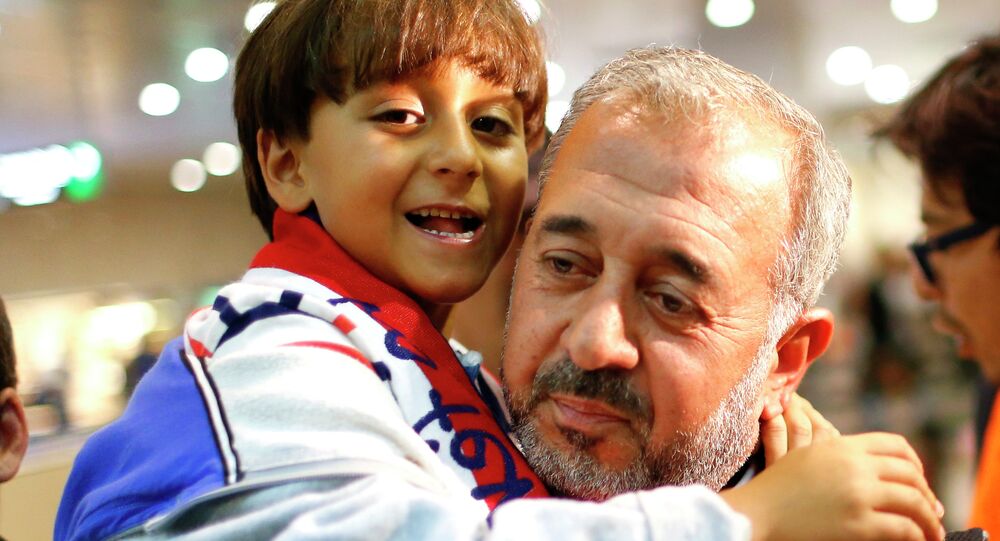 The Syrian refugee who was carrying his young son when he was tripped by a Hungarian camerawoman is starting a new life in Spain, where he will resume his career as a soccer coach.

Osama Abdul Mohsen made international headlines earlier this month when a video emerged showing Petra László of Hungary's N1TV sticking her leg out to trip Mohsen – who was carrying his 7-year-old son – as he tried to dart by authorities at the Hungary-Serbia border.

Moshen and his son, who were among dozens of migrants attempting to escape police at the crossing, ended up in Germany, where the media reported that Mohsen had worked as a soccer coach in Syria before the civil war forced his family to flee their hometown.

News of Moshen's plight reached Spain and CENAFE, an academy in a Madrid suburb dedicated to training soccer coaches.

"When we saw the story of Mohsen published in the newspapers we felt terrible," CENAFE's Conrado Galán told El País.

With the help of one of the school's coaching graduates who speaks Arabic, the academy arranged for Mohsen to bring his family to Spain and rebuild his career as a coach. CENAFE has also arranged for housing for the family.

Mohsen's wife and two other children remain in Turkey, but the hope is to reunite the family in Spain within a week, said Galán, of CENAFE.

The academy also plans to help the father of four apply for asylum in Spain. Last week, Spain agreed to welcome 17,680 refugees from Syria and other countries under a plan set up by the European Commission.

After footage of László tripping Mohsen and kicking other refugees went viral, the camerawoman apologized for her actions. Nonetheless, was fired from her job at N1TV, and now faces criminal charges.