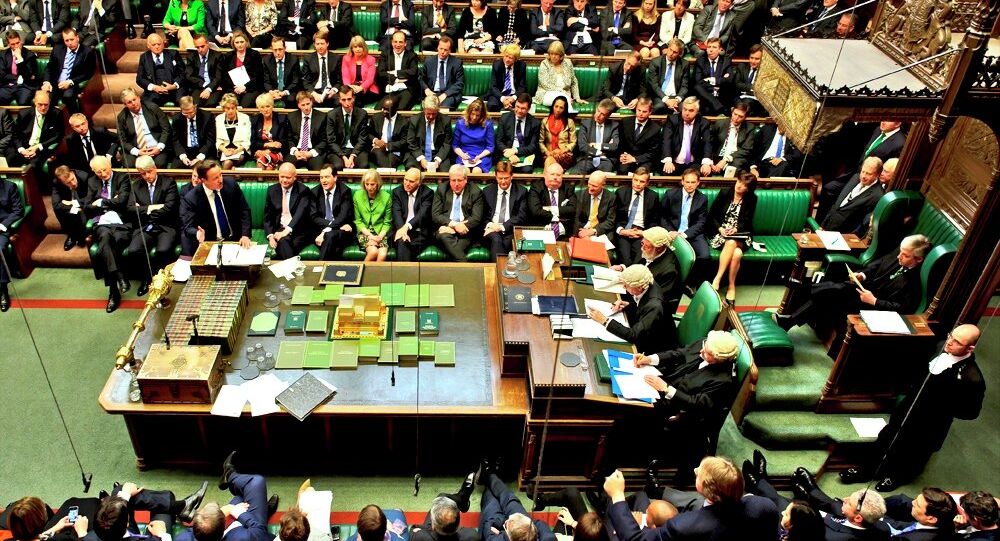 Appearing at his first Prime Minister's Question Time since being elected in a surprise result as leader of the Labour Party, Jeremy Corbyn failed to score points over Prime Minister David Cameron in the much-awaited clash.

The weekly Prime Minister's Question Time — known as PMQs — is eagerly watched around the world and usually comprises a verbal battle between the prime minister and the leader of the opposition with much political mudslinging.

Many see it as an opportunity to hold the prime minister to account, but others consider it to be a political pantomime, with many lawmakers shouting at each other, jeering, waving their order papers around and yelling "hear hear" or "shame", depending on whether they like or dislike something said.

Today's #PMQs were serious, which politics is. If you like theatre, perhaps politics isn't for you. #JeremyCorbyn

Wednesday's battle between David Cameron and Jeremy Corbyn was their first meeting since the left-wing firebrand took control of the Labour Party in a move which has angered many of his own lawmakers. His election — coming from outsider to winner in a matter of weeks — has shocked many who fear he will take the party from the Tony Blair-led center ground to the left.

Cameron's Conservatives saw his election as a dream and believe Corbyn's leadership will herald chaos within the opposition Labour Party, possibly making them unelectable in 2020. However, sources said Cameron would be careful to avoid personal remarks about Corbyn.

Refreshing approach to #PMQs from @jeremycorbyn today. Use of questions from the public a welcome example of a more participatory politics.

For his part, Corbyn promised a new style of PMQs — less bombastic and more based on suggestions from supporters. He was given 40,000 suggested questions, via social media and e-mail, for his first appearance and many sat back to watch the televised bunfight.

However, his surprise victory has alienated most of his colleagues. He struggled to get people even to join his shadow cabinet and there have been massive differences of opinion over his policies — many of which are at odds with the rest of his colleagues and the party as a whole.

The fun began when one lawmaker asked Cameron to pay tribute to those who had fought in the Battle of Britain, the 75 anniversary of which was commemorated Tuesday. Cameron duly obliged, but the sub-text was clear. Corbyn is a republican and was widely criticized in the media Wednesday for refusing to sing the national anthem at the commemoration service at St Paul's Cathedral.

Cameron got his first jibe in against famously anti-war Corbyn — who protested against the invasion of Iraq in 2003 under Labour's watch — by saying: "It's a reminder of how proud we should be of our armed forces, then, today and always."

Corbyn got to his feet and said that — during his election campaign — people had told him that PMQs had become "too theatrical" and that parliament was "out of touch". He then began reading out six questions from those who had submitted them.

Cameron gave Corbyn a gushing welcome, congratulating hism on his "resounding" victory in the leadership election and welcoming his new approach to PMQs.

His first question was from a woman called Maria who asked what the government intended to do about the lack of affordable homes and the extortionate rents charged by private landlords.

Cameron says has built more affordable homes and council houses. "We won't get Britain bulding unless we keep our economy going". #pmqs

This was not the killer blow his party had been hoping for and Cameron swiftly and agreed on the need for more affordable homes and listing how many the government had built (260,000 in the last parliament), plans for reforming the housing system, encouraging starter homes, and continuing to support help-to-buy. A list of policies on Cameron's part to match no clear policies on Corbyn's.

But Cameron's killer blow was to throw another jibe against Corbyn's economic record — which is largely derided. "We won't get Britain building, unless we keep our economy going."

Many analysts believe Labour lost the last two elections because of a lack of trust in its ability to handle the economy safely and Corbyn's trustworthiness on the issue is doubted by many of those in his own party.

Corbyn then read out five more questions from his followers — playing the part, not of party leader, but of toastmaster. Time after time, Cameron was able to list policy after policy, and taking aim at the disarray that sat opposite him on the Labour benches.

Corbyn's morning had not started well, after a cameraman was bowled over in the scrum outside his house and taken to hospital with face and head injuries. His first appearance at PMQs may not have been "theatrical" but nor did it live up to the expectations of most of his lawmakers, many of whom sat in silence, bemoaning his failure to pack a political punch.