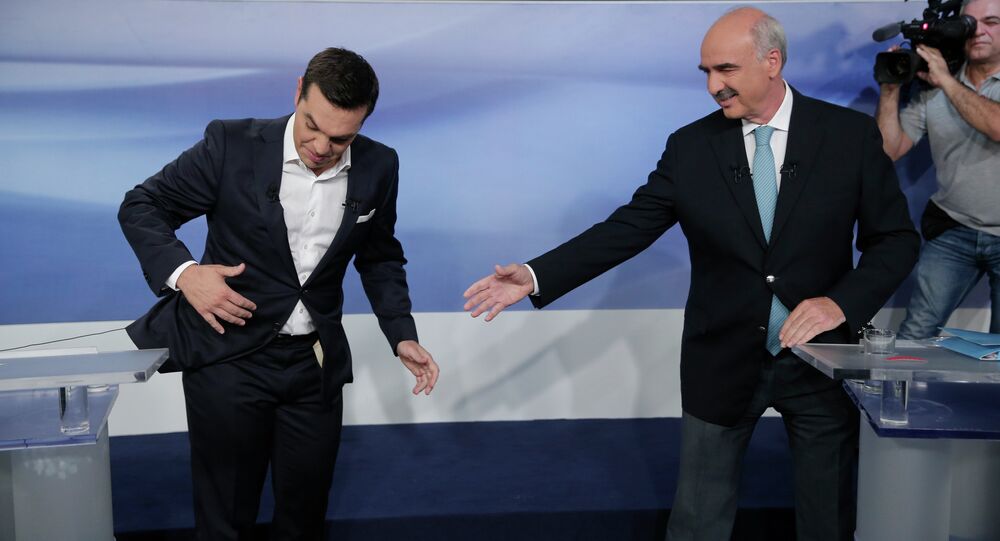 Greece Set for Political Stalemate as Coalition Ruled Out

Meimarakis had held out an offer for Tsipras, saying Syriza was welcome to join his ND party in an alliance if — as the polls project — no clear winner emerges after the elections on September 20. "We can have a national team not only in the governance of the country, but also a national negotiating team (for the bailout)," he said.

But he ruled out sharing power with Tsipras in a coalition government, saying:

In turn, former Prime Minister Tsipras ruled out any alliance saying: "There will either be a progressive government or a conservative government," saying stability will be secured with the largest possible percentage for Syriza.

Dilemma we'll be facing nxt Sunday is simple: do we want a #Greece that'll favor the 1% or 99%? The choice is in your hands #ERTdebate2015

Tsipras was swept to victory in the January 2105 elections, falling just short of a majority, but going into an alliance with the right-wing populist Independent Greeks party to form a coalition. He rose to power as the leader of an anti-austerity party to fight the crippling economic policies being imposed on Greece by its creditors.

Forced to be bailed out by the Troika — the International Monetary Fund (IMF), European Central Bank (ECB) and the Eurozone member countries — Greece had to be bailed out twice and was heading for a third bailout.

Tsipras went into negotiation with the Troika by refusing to accept cuts to pension payments or public sector wages, nor did he accept the deep public spending cuts Greece was being asked for. He also held out against widening the sales tax (VAT) base.

Tsipras went to the country for a mandate in the Greek bailout referendum in July 2015 and won a resounding 'No' to accepting the tough bailout conditions. However, the Greek economy worsened and the Troika renegotiated even tougher conditions.

In accepting the tougher conditions, Tsipras caused a split in his party, with many angry that he had accepted even worse austerity measures than those voted on in the referendum.

As his anti-austerity campaign appeared to be failing, Tsipras called a snap election to win another mandate for the bailout negotiations. However, polls have shown support for Tsipras sliding, with the latest showing no party will win overall control.

With the country deeply divided over pension reforms, higher and broader taxes and public sector cuts, a political hiatus after September 20, Athens is set for further political, economic and — possibly — social turmoil. Tsipras' gamble will have back-fired on the man swept to power only nine months ago.

Tsipras Believes He is Able to Form New Government After Elections