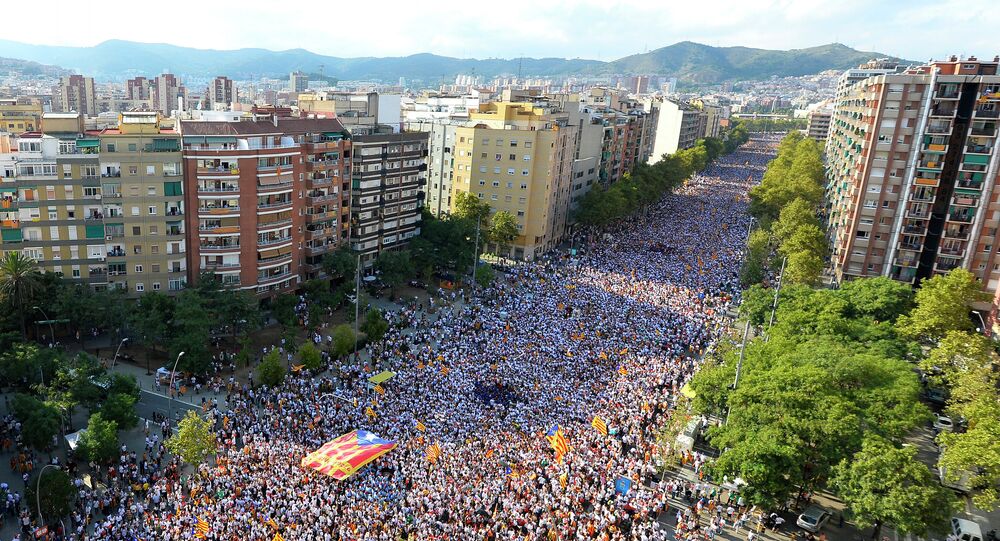 Hundreds of Thousands of Catalans Join Rally in Barcelona

Hundreds of thousands of Catalans participated in independance rally that was held ahead of regional elections on September 27.

© AFP 2020 / QUIQUE GARCIA
Friday Independence Rally in Barcelona to Become One of Largest in History
MOSCOW (Sputnik) — Hundreds of thousands of Catalans took to the streets of Barcelona to participate in a mass independence demonstration, called Gateway to the Catalan Republic.

The march began at 17:14 local time (19:14 GMT), a time chosen as a reminder of the year 1714, when Catalonia was defeated during the War of the Spanish Succession.

People are carrying a gigantic arrowhead from the north of the Avinguda Meridiana, a major avenue in Barcelona, toward the Catalan Parliament in the Parc de la Ciutadella. The 3-mile distance has 135 sections, symbolizing the number of members of the local parliament.

This year, the demonstration is being held ahead of regional elections on September 27. Several coalitions of pro-independence parties have pledged to sponsor the organization of an official independence referendum, if they win the vote.

© REUTERS / Albert Gea
Thousands Gather in Barcelona to Support Catalan Independence Bid - Reports
Earlier in the day, Jordi Sanchez, the president of the Catalan National Assembly (ANC), organizing the event, told Sputnik that Friday's rally is expected to become one of the largest rallies in Catalonian history.

Merkel Speaks in Support of Preventing Catalonia's Secession From Spain