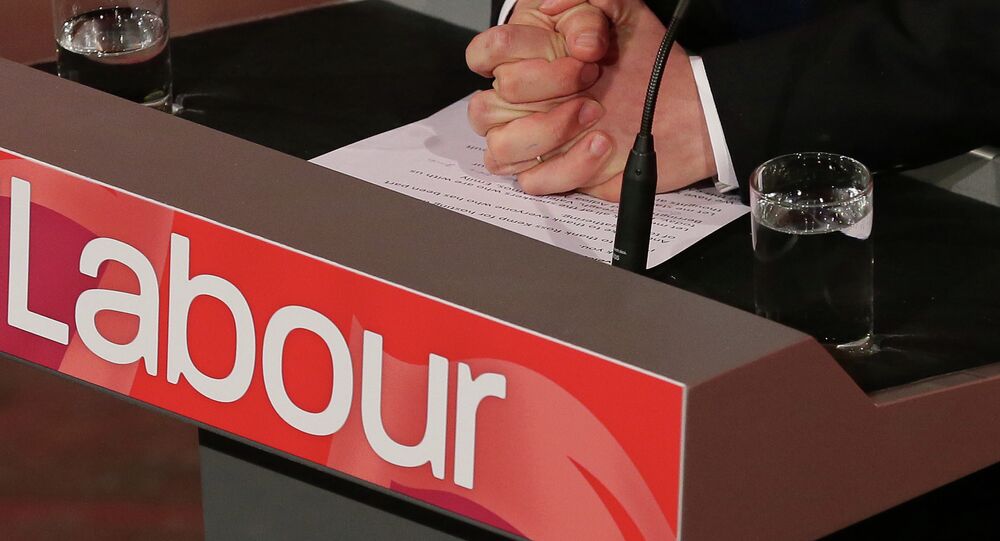 The British Labour Party – which has long represented the working classes since its inception in 1900 – is facing its worst crisis in decades as left-winger Jeremy Corbyn looks set to win its leadership race this weekend.

Having enjoyed 13 years in power under Tony Blair and Gordon Brown, Labour lost to the Coalition Conservative-Liberal Democrat government led by David Cameron.

However, it was Labour's unexpected and spectacular defeat in the May 2015 election that caused shockwaves. All the polls pointed to a neck-and-neck finish, with Labour leader Ed Miliband having every possibility of forming a government. In the event, the Conservatives slid in with a slim majority of 12.

© AP Photo / Tim Ireland
Britain's Labour Party leader Ed Miliband holds up his hands as he delivers his resignation at a press conference in Westminster, London, Friday, May 8, 2015

However, when Jeremy Corbyn secured enough nominations to run for leadership, some were surprised and many derided his attempt. Corbyn is a member of the Socialist Campaign Group, the Palestinian Solidarity Campaign, Amnesty International, the Campaign for Nuclear Disarmament and the Stop the War Coalition.

He has called for the re-nationalization of the railways and public utilities, the scrapping of university tuition fees and the abandonment of a nuclear deterrent. He is fiercely anti-war. He lacks any of the ministerial experience of the other contenders and has always been a backbencher in parliament. Yet he is leading the opinion polls and may well be declared Labour leader on Saturday.

Rise and Fall of Labour

His meteoric rise to fame can be put down to several events. When Tony Blair led the party to victory in 1997, it was because he had brought a new political ideology into the Labour Party. Shaking off its trade union movement and socialist background, Blair moved the party to the center ground.

Blair and his Chancellor Gordon Brown gave the City of London what it wanted: a light touch regulator and the independence of the Bank of England. He poured billions into education and public services and pursued a very close relationship with the US, in terms of foreign policy.

But it was his decision to join US President George W. Bush in the invasion of Iraq which proved a turning point. There was massive public opposition to the war and argument still rages over whether it was legal, whether it was for regime change, or whether there was an exit strategy. There is growing anger that the Chilcot Inquiry into that war has yet to report. Corbyn's anti-war stance may have touched a nerve with many.

Gordon Brown took over as Prime Minister when Blair stood down, but never enjoyed a popular mandate, in there being no general election. Having been Chancellor of the Exchequer for such a long time, overseeing a light-touch financial regulatory system, he inevitably faced criticism when he presided over the global credit crunch. This led to the perception that Labour was not to be trusted on the economy.

Following election defeat in 2010, Brown was dispatched and another Labour leadership battle ensued in which the brothers David and Ed Miliband faced each other off. David was by far the most experienced politician, having been Foreign Secretary, Environment Secretary and Communities Secretary. However, with the complex Labour Party voting system, Ed Miliband won and his brother left the world of politics.

Ed Miliband shunned the Blairites within the party and talked on a "new politics", but ultimately failed to bring the party together under a manifesto that people believed in. He made limited attempts to curb the powers of the unions within the Labour Party. He was widely derided in the right-wing media and an image of him struggling to eat a traditional working man's bacon butty persistently bugged his leadership and forced many to question his statesmanship.

© AFP 2021 / LESLEY MARTIN
Anti-NATO, Anti-War: Why the UK Establishment Fears Jeremy Corbyn
By this point, the party was split between the old-fashioned traditional trade-unionists, who hated being side-lined by the center-ground Blairites; the Blairites themselves, who argued that they had won power for 13 years by occupying the center ground; and the Milibands who talked down Blair's 'New Labour' concepts and of a "new politics".

In May 2015, Miliband was visibly upset at the scale of Labour's loss. When he resigned, Labour started licking its wounds and wondering how it managed to lose the election. The leadership battle got underway, but the main front-runners failed to engage in the early stages.

It was only when Corbyn joined the race that the media got excited. But traditional Labour supporters did too and membership of the party mushroomed as traditional socialist supporters saw their opportunity.

If Corbyn is announced as leader of Labour at midday London time Saturday, it will propel the party into crisis. Where will the Blairite and the Mili-fans go? If Corbyn wins, there will be much soul searching about what the direction the party should take if it is to be electable in 2020. Some are predicting a complete split and blood on the carpet within months. Watch this space!