Europe is tearing itself apart after the current migrant and refugee crisis has left the southern states wanting to get rid of them and the eastern states wanting nothing to do with them, Denmark closing is borders and the UK looking on from behind the Schengen zone.

European Commission President Jean-Claude Juncker's plans for a redistribution of refugees throughout Europe has met with a mixed reaction, with Germany, France and Spain backing the plan, but the Czech Republic, Hungary, Poland, and Slovakia expected to fight against it.

The failure of a common asylum policy has brought to a head one of the fundamental principles of the European Union — that of freedom of movement and the borderless zone of the Schengen nations. Even Juncker admitted Europe was at a crossroads in his state-of-the-union speech this week.

"The bell tolls, the time has come. We have to look at the huge issues with which the European Union is now confronted. Our Union is not in a good situation. There is a lack of Europe in this union, and a lack of union in this union."

The collapse of the asylum policy — if there ever was one — has been epitomized by Germany's decision to drop the Dublin agreement, whereby refugees can be sent back to the country of their first point of entry for registration. Italy, Greece and Hungary have borne the greatest burden in the current crisis, with thousands of people arriving each day and making their way to other countries. 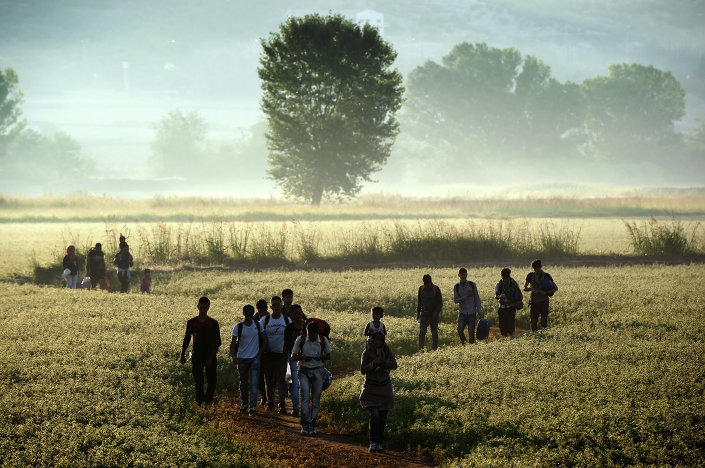 © AFP 2019 / ARIS MESSINIS
Migrants walk through a field to cross the border from Greece to Macedonia near the Greek village of Idomeni on August 29, 2015

Germany has said it would take in up to 800,000 this year, although that may well grow to more than a million, according to most analysts. In contrast, the UK has agreed to take in 20,000 refugees from Syria, but only those from refugee camps in the Middle East.

Juncker has proposed an emergency relocation package for 120,000 refugees from Greece, Hungary and Italy, following the sharp increase in illegal border crossings in the Central and Eastern Mediterranean, as well as on the Western Balkans route. 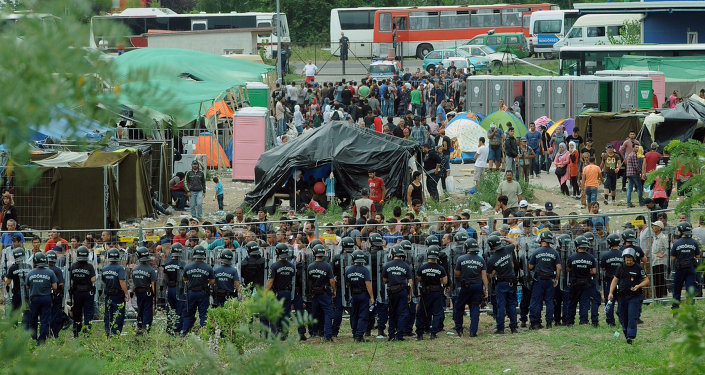 He said the relocation would be done according to a "mandatory distribution key using objective and quantifiable criteria (40% of the size of the population, 40% of the GDP, 10% of the average number of past asylum applications, 10% of the unemployment rate)."

However, this has been greeted with disdain in Eastern Europe. "The compulsory quotas are not a good solution," Czech Republic Prime Minister Bohuslav Sobotka said.

"To continue with a discussion about their [compulsory quotas] establishment all across Europe only prevents us from taking really important and necessary steps."

Denmark closed its road and rail borders with Germany overnight, for a period, in an attempt to quell the tide of refugees attempting to make their way to Sweden, which has offered hospitality.

© REUTERS / Jens Norgaard Larsen/Scanpix
Danish police guard a train carrying migrants, mainly from Syria and Iraq, at Rodby train station, south of Denmark, September 9, 2015. The migrants, hoping to get to Sweden, arrived at Rodby on Tuesday night and refused to leave the train to get registered in Denmark.

Meanwhile, Hungary continues to build a razor wire fence along its border to shut off the route from Serbia.

When Juncker took over as EC President, he promised to implement the Common European Asylum System "without delay". He said:

"No rules are perfect, and the new rules are naturally the result of compromise. However, they have the advantage of being able to put a definite stop to 'asylum tourism'."

Today, his dream lies in tatters as EU states and their neighbours bicker over how to deal with the growing tide of refugees and migrants arriving in Europe.