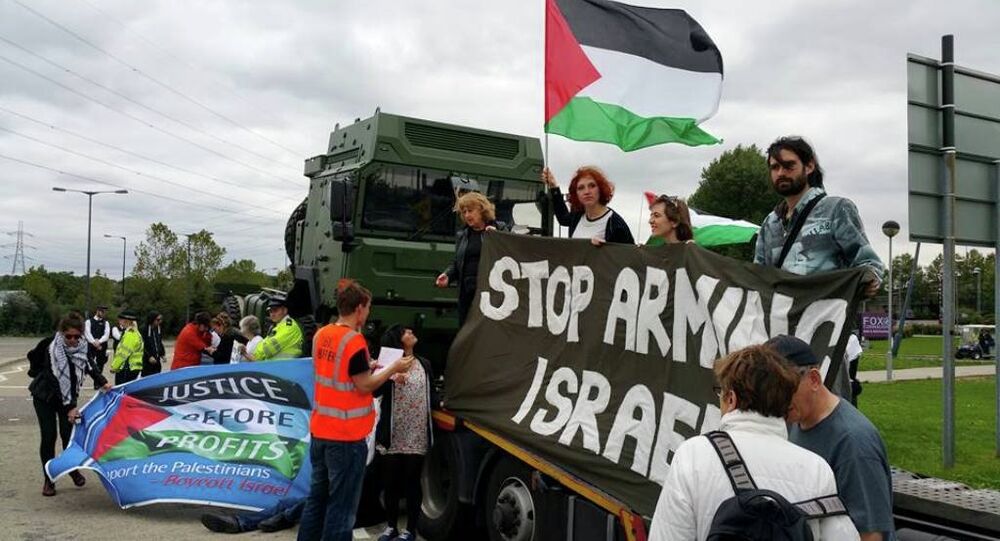 UK anti-arms campaigners and human rights activists have set up a blockade at one of the world's largest arms fairs to protest against Britain's arms export trade. The protests follow a survey that revealed 70 percent of Brits were opposed to selling arms to undemocratic or violent regimes.

With the Defense & Security Equipment International (DSEI) arms fair set to take place in London next week, protesters have set up a blockade at the site in the hope of interrupting the set-up of the event.

More than 1,000 international arms firms and 30,000 people from all over the world are expected to attend the DSEI, which is one of the world's largest arms fairs.

Protesters are hoping to raise awareness about the state of the UK's arms trade, with London criticized for supplying arms to countries shown to have made serious human rights violations such as Saudi Arabia, Israel and Bahrain.

The protests come amid a new survey carried out by research group Opinium, which found that 70 percent of Britons were opposed to the UK selling weapons to undemocratic countries or those with violent regimes.

Despite widespread human rights concerns in Saudi Arabia, violent crackdowns against protesters in Bahrain and last year's Israeli summer offensive in Gaza, where leaders were accused of committing war crimes, the UK continues to sell significant arms products to the countries.

Posted by Campaign Against Arms Trade on Wednesday, September 9, 2015

Andrew Smith from the Campaign Against Arms Trade (CAAT), who are among the groups taking part in the London protests, told Sputnik that the government is blatantly ignoring the beliefs and opinions of the British public when it comes to the arms trade.

"It seems that the UK values the arms trade more than the opinions of its citizens."

He said that the continued sale of weapons to such countries was contributing to the oppression of citizens.

In a letter to British newspaper the Guardian, a number of union members, Labour MPs and other prominent figures denounced Netanyahu's UK visit, saying the Israeli PM must "must bear responsibility for war crimes identified by the UN human rights council in its investigation into Israel's 2014 assault on Gaza."

Cartoon of the Day: Greeting Party For @netanyahu in #London, Via @MiddleEastEye cc @tonyblairoffice pic.twitter.com/U1edfVIQFa

This was also followed by more than 100,000 people signing a petition calling on Netanyahu to be arrested by UK officials during his visit to London as a result of last year's Gaza offensive.

US Profits From Wars and Conflicts More Than Any Other Country