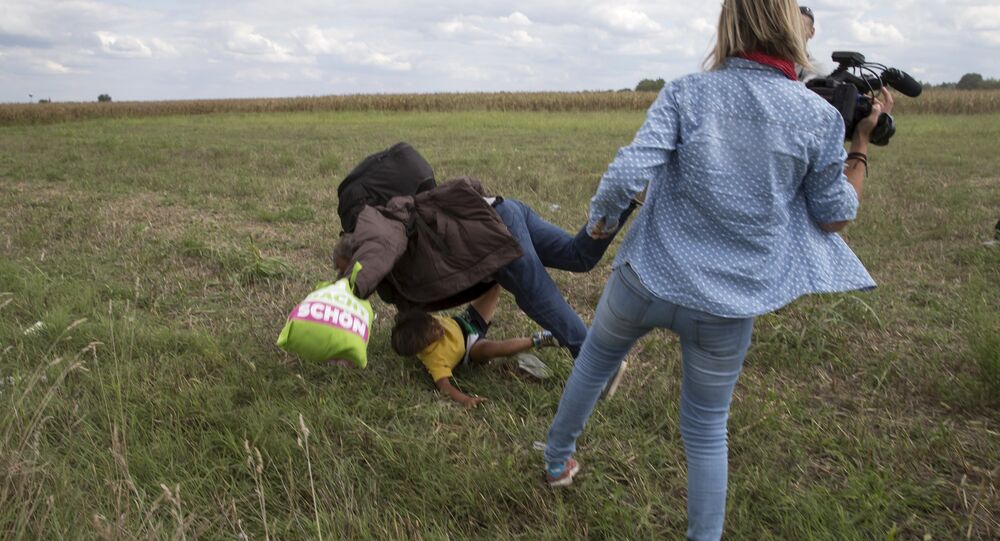 A Hungarian camerawoman who was filming refugees run over the border and into Hungary was fired from her job for deliberately tripping a migrant who was holding a child as he fled police.

The woman, who was working for Hungarian news site N1TV, was filming crowds of refugees from the Middle East as they fled across a field from Roszke camp on the Hungarian-Serbian border.

Video footage showed her deliberately sticking her leg out as a man carrying a crying child ran by her. The refugee fell to the ground with the child underneath him before the man turned to shout at her.

The camerawoman was fired immediately after her employer saw the footage online, according to local media reports.

A statement posted on the station's website on Tuesday said: "Today, a N1TV colleague behaved unacceptably at the Roeszke reception centre. The cameraman's employment was terminated with immediate effect."

She was wearing a mask, but has been identified as Petra Laszlo.

The man and boy were among a group of 1,500 people who had been waiting at a makeshift relocation camp near the Roszke crossing.

Tensions at the camp had been rising for days, and on Tuesday, many refugees burst through police lines to try and continue their journey to Western countries waiting to receive them.