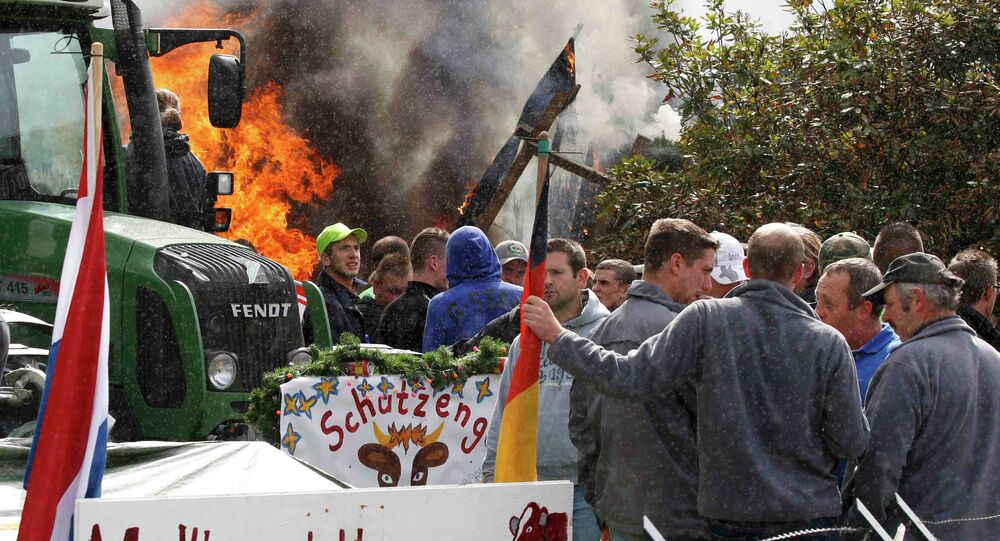 Thousands of European farmers are blocking the streets of Brussels to urge EU authorities to financially support the producers left on the brink of bankruptcy by low prices, undermined by cheap imports.

Mainly Belgian, French and German farmers blocked streets in front of the headquarters of the EU Council, where an emergency summit of the Agriculture Council of the European Union, aimed at addressing the negative impact of Russia’s food embargo on the EU food market, will be carried out later in the day.

Latest edition of Monster Trucks of Brussels outside the office pic.twitter.com/BL5USYJjn3

Farmers, hard-hit by the effects of the restrictive measures the European Union imposed against Russia, are calling for a lifting of the sanctions regime.

"Europe is drowning in milk," read banners held by farmers representing the European Milk Board.

The protest takes place five days after French farmers drove over 1,500 tractors through the streets of Paris on Thursday demanding fair prices and more support from their government.

According to the Copa-Cogeca farm trade union, EU agricultural producers have claimed the damages of some $6.13 billion due to the food embargo.

In August 2014, Moscow imposed a one-year ban on the import of certain food products from the countries that had introduced sanctions against Russia. The food ban was later extended for another year.

France’s Aid Package for Farmers to Reach $3.3 Bln Over 3 Years

Some 5,000 Farmers to Protest Low Dairy Prices in Brussels on September 7