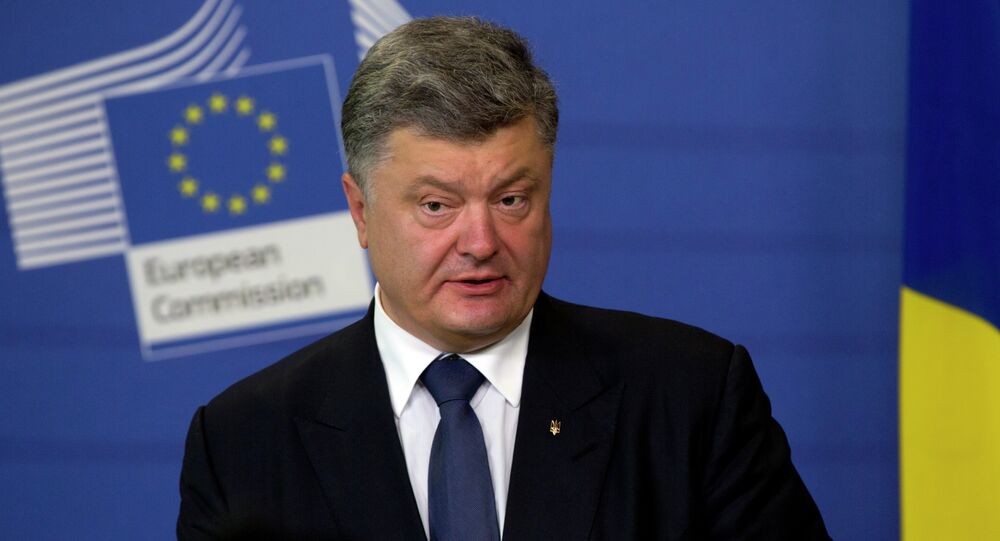 Ukrainian President Petro Poroshenko said that he still had hopes in the Minsk peace agreement with militias but was working on "Plan B" for addressing the armed conflict in Donbass.

© REUTERS / Valentyn Ogirenko
No Special Conditions for Russia Regarding Debt Restructuring - Poroshenko
KIEV (Sputnik) — Kiev will not take into account Russia's comments on the participation of Donetsk and Luhansk in the process of amending the Ukrainian Constitution on decentralization, President Petro Poroshenko said Sunday.

"We have fulfilled our obligations regarding the start of the constitutional process, although Russia has written notes on 20 pages — it will not happen, we are not going to consider these remarks during constitutional amendment," Poroshenko said in an interview with three local TV channels.

The president added that Kiev had conducted all the necessary procedures and was "simply not interested" in the fact that Russia did not like it.

"It means the opposite — that what we are doing is the right thing," Poroshenko added.

Also Ukrainian leader said that Kiev would appeal to the "international coalition" with the request to expand and extend sanctions against Russia if Ukrainian eastern regions of Donetsk and Lugansk hold independent local elections.

"If there are elections, we will negotiate and reach an agreement with the international coalition in support of Ukraine concerning the extension and deepening, expansion and increase of sanctions," Poroshenko stated.

Poroshenko mentioned "Plan B" on which he is working.

"Plan B is what I am busy working on right now, although I still have hopes and am doing my best to… return Ukrainian territories under Ukraine’s control," the president said.

A new ceasefire came into effect on September 1, in a fresh bid to end violence in the southeast of the country. The parties to the conflict last agreed on a truce in Belarusian capital Minsk in mid-February 2015, but both government forces and militias since accused each other of violating the deal.

© REUTERS / Valentyn Ogirenko
NATO Not Ready to Accept Ukraine – President Poroshenko
In March, Poroshenko signed a law stating that the self-proclaimed people's republics of Donetsk and Luhansk (DPR and LPR) will be eligible for special administrative status only if local elections are held in line with Ukrainian laws and under the supervision of international observers.

According to the Minsk peace agreements signed by Kiev and Donbas representatives in February, both constitutional reforms aimed at decentralizing power in Ukraine and local elections in Donbas must be implemented before the end of 2015.

Ukraine plans to hold parliamentary elections on October 25, however, they will not cover DPR and LPR, where local elections are scheduled to be held on October 18 and November 1 respectively.

The United States, the European Union and their allies have imposed several rounds of economic sanctions against Russia since 2014 over its alleged meddling in Ukrainian internal affairs, a claim that Moscow has repeatedly denied.

© AP Photo / Efrem Lukatsky
Minsk Deal Finally Working, No Shelling in Donbass for a Week
On Monday, the Ukrainian parliament approved constitutional amendments on the decentralization of power in the country. However, Poroshenko said that the reform did not assign a special status to the crisis-hit eastern regions.

Russian President Vladimir Putin said on Friday that Kiev is bound by the Minsk peace accord to agree any amendments to the Constitution in relation to the decentralization of power in the country with the Donbas militias, adding that there was no such dialogue taking place at the moment.

No Special Conditions for Russia Regarding Debt Restructuring - Poroshenko